This large map of Calgary and surrounding area shows highly detailed local information for the Calgary city. The map has been designed in a very clear and legible manner with a traditional Canada street map style embraced by map buyers over many years.

This map is available in 37.25 x 53.5 in. Please select a finish of your choice
Please wait, adding to your cart
Please wait, initializing the product
Add to Compare 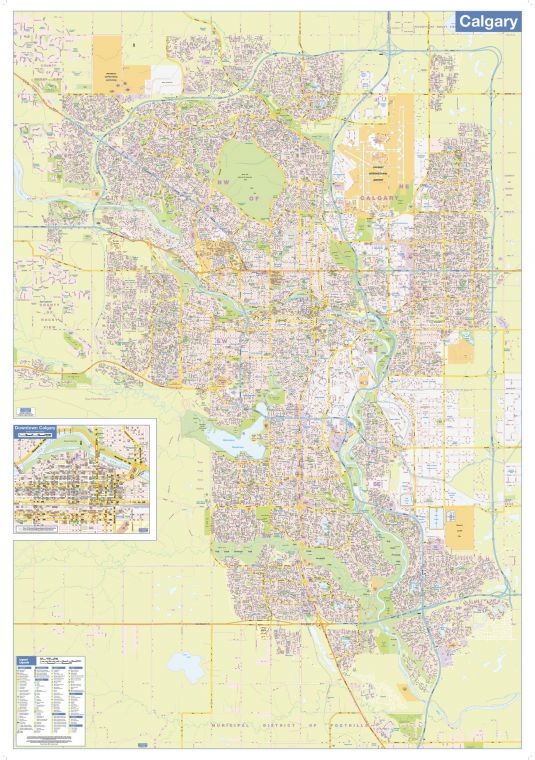 The city situated in the Canadian province of Alberta is at the confluence of the Bow River and the Elbow River in the south of the province, in an area of foothills and prairie, about 80 km east of the front ranges of the Canadian Rockies.

The Calgary census metropolitan area also had the highest number of millionaires per capita of any major city in Canada, and it is also home to the second-highest number of corporate head offices in Canada. The city is consistently named for its high quality of life and is even ranked the fourth most liveable city in the world.

59.5% of Calgary's population was of European origin, 4% was of Aboriginal heritage, and 36.2% of the population belonged to a visible minority. The British, German, Irish, French, and Ukrainian were the most frequently reported ethnic backgrounds in the region. Among visible minorities, the South Asians made up the largest group (9.5%), followed by Chinese (6.8%) and Filipinos (5.5%). 5.4% were of African or Caribbean origin, 3.5% was of West Asian or Middle-Eastern origin, while 2.6% of the population was of Latin American origin.

The city has seen recent investments in transportation and logistics department. Moreover, the level of investment in distribution and warehouse facilities has been higher in the Calgary region than any other Western Canadian city.

Calgary effectively serves global markets as it has one of Canada's busiest airports, major highways north-south and east-west, two of North America's Class 1 railroads, and efficient access to all open ports.

YYC Calgary International Airport is one of Canada's best-connected airports, providing flights to 80 non-stops destinations and welcoming more than 15.7 million passengers in 2016.

Calgary is home to both Canadian Class I railroads - Canadian Pacific Railway and CN Rail. Both railroads offer carload and intermodal services, with efficient connectivity through the U.S. and Mexico.

Calgary’s central location in Western Canada has access to national highway systems and proximity to the U.S. border expedites transportation from Calgary throughout North America and into Mexico.