This street map for city of Hamilton Ontario shows highly detailed local information. Full street labeling along with transit information, parks, schools, churches and landmarks throughout the city are displayed.

This map is available in 54 x 37.5 in. Please select a finish of your choice
Please wait, adding to your cart
Please wait, initializing the product
Add to Compare 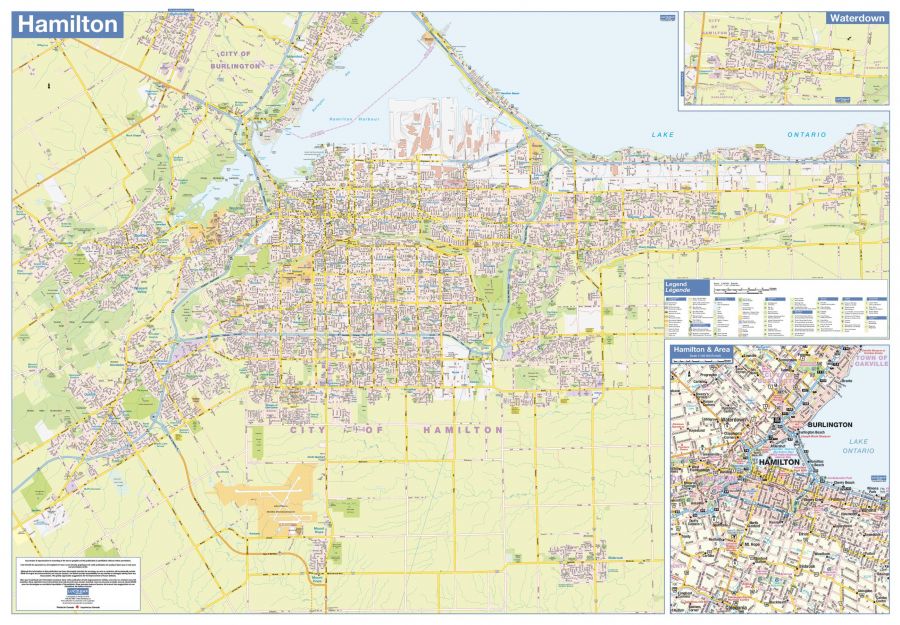 This large street map of Hamilton Ontario shows highly detailed local information of the city of Hamilton. Full street labelling along with transit information, parks, schools, churches and landmarks throughout the city is displayed.

Lucidmap published Hamilton city map is a clear representation of the city’s street information. The Hamilton Map of Canada is designed on a scale of 1:24,000, and is marked with details of important roads, streets, transit, interstate highways, toll roads & bridges, U.S Highways, State Roads, Major Rivers, Intermediate Rivers, Motorways, Tracks, Pipelines, and All Weather Roads. There is also a close-up inset of the Hamilton City shows the Hamilton surrounding area and the Waterdown area.

The Hamilton city was formed through the amalgamation of the former city and the other constituent lower-tier municipalities of the Regional Municipality of Hamilton-Wentworth with the upper-tier regional government. It is in the geographic centre of the Golden Horseshoe and is roughly the midway point between Toronto and Buffalo, New York.

The port city in the Canadian province of Ontario is an industrialised city in the Golden Horseshoe at the west end of Lake Ontario. Situated in Southern Ontario on the western end of the Niagara Peninsula and wraps around the westernmost part of Lake Ontario; most of the city, including the downtown section, is on the south shore.

The primary economic activity in Ontario is manufacturing, and the Toronto - Hamilton region is the country’s most highly industrialized area. The area from Oshawa, Ontario around the west end of Lake Ontario to Niagara Falls, with Hamilton at its centre, is known as the Golden Horseshoe.

The Hamilton ontario map was published by Lucidmap. The company has its head offices in Toronto, Ontario and works with an experienced team of some of the best cartographers, graphic designers and GIS specialists in the industry.