This map Hamilton Ontario streets shows highly detailed local information for the city of Hamilton. Full street labeling along with transit information, parks, schools, churches and landmarks throughout the city are displayed.

This map is available in 40 x 28 in. Please select a finish of your choice
Please wait, adding to your cart
Please wait, initializing the product
Add to Compare 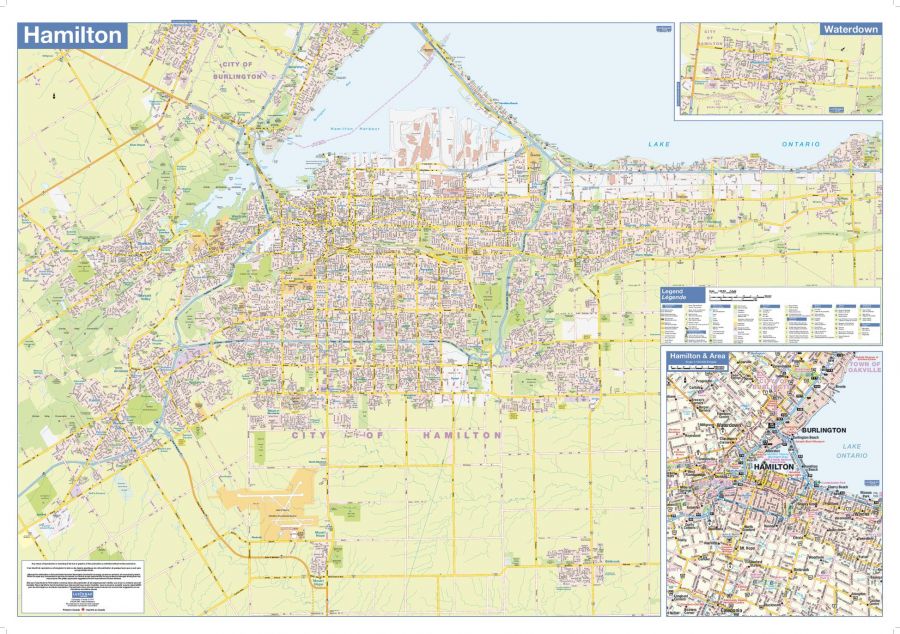 This Hamilton Map shows highly detailed local information for the city of Hamilton. Full street labelling along with transit information, parks, schools, churches and landmarks throughout the city is displayed.

This Hamilton Canada map has been designed in a very clear and legible manner with a traditional Canadian street map style embraced by map buyers over many years.

This map of Hamilton Area showing street detail contains up-to-date information with full street labelling of roads, highways, transits, parks, schools, centralised buildings, churches and landmarks. The map is informative with detailed insets of Hamilton & Area, Waterdown, and a panel showing legend. The legend highlights symbols that have been used all over the map.

It clearly marks the city of Burlington, Hamilton, Lake Ontario. The map can be ordered in 40.75x28.75 inches a variety of finishing options including paper, matte plastic, matte plastic with rails, and lamination.

This Hamilton ontario map was published by Lucidmap. The publishing house is situated in Toronto, Ontario and is considered the largest private map company of Canada. They have a team comprising of some of the best cartographers, graphic designers, and GIS specialists in the industry. The company publishes and sells printed map products, atlases, fold map titles. By providing custom cartographic and GIS services in several domains including enterprise, public sector, business, real estate, recreation, tourism, and more, the company has largely grown to reach out to corporate clients overseas.

Situated in the Canadian province of Ontario, the industrial city in the Golden Horseshoe at the west end of Lake Ontario was formed through the amalgamation of the former city and the other constituent lower-tier municipalities of the Regional Municipality of Hamilton-Wentworth with the upper-tier regional government.

Hamilton is in Southern Ontario on the western end of the Niagara Peninsula and wraps around the westernmost part of Lake Ontario; most of the city, including the downtown section, is on the south shore. The city is located in the geographic centre of the Golden Horseshoe and is roughly the midway point between Toronto and Buffalo, New York, though slightly closer to the former.

As per the 2016 Canadian census, about 24.69% of the city’s population was born outside Canada. The foreign-born population increased by 7.7% while the total population of the Hamilton census metropolitan area (CMA) grew by 4.3%.

The Canadian city is home to 26,330 immigrants who arrived in Canada between 2001 and 2010 and 13,150 immigrants who arrived between 2011 and 2016. Hamilton maintains a significant Italian, English, Scottish, German and Irish ancestry. Hamiltonians claim English heritage, while 98,765 indicate their ancestors arrived from Scotland,87,825 from Ireland, 62,335 from Italy, and 50,400 from Germany.