An Accurate Map of Canada with the Adjacent Countries

Contained within the Historical Maps, 1639 to 1949, Atlas of Canada is a reproduction of the An Accurate Map of Canada with the Adjacent Countries. It was produced by Richard William Seale and published in 1767 in London by J. Hinton.

This map is available in 15.25 x 12 in. Please select a finish of your choice
Please wait, adding to your cart
Please wait, initializing the product
Add to Compare 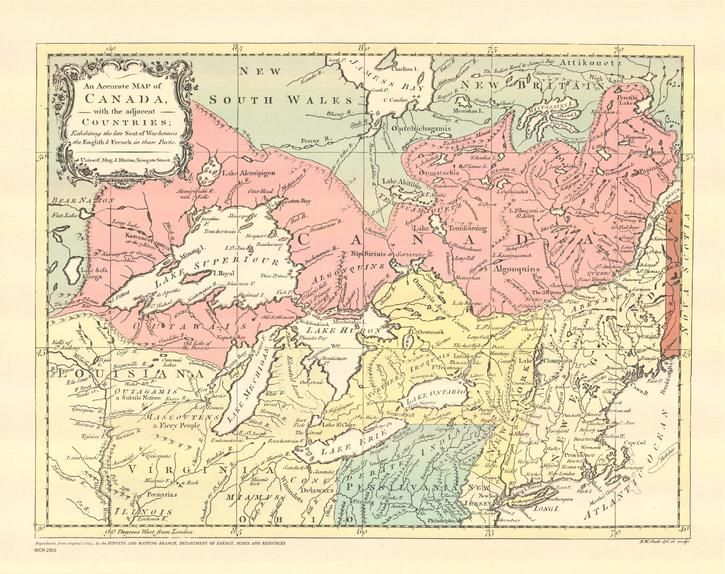 Contained within the Historical Maps, 1639 to 1949, Atlas of Canada is a reproduction of the An Accurate Map of Canada with the Adjacent Countries. It was produced by Richard William Seale and published in 1767 in London by J. Hinton.

What does the map show?

A closer look at the map shows the major countries that surround Canada. The map appears aesthetically pleasing with the use of subdued multi-colour palette. Distinct hues show different countries and major political details including boundaries, and geographic areas are outlined clearly. The map looks pretty decent with a peach border, and can be picked up for home decor!

Australian state New South Wales and other US states like Pennsylvania, New Britain, Louisiana, Virginia are shown on the map. The map exhibits the late seat of war between the English & French in those parts. Geographically, Canada is bordered by Alaska in the west, and by 12 US states of the continental United States in the South. Besides, Canada also shares maritime borders with Greenland, Saint Pierre, and Miquelon, an island which is a part of France.

The map is produced by Richard William Seale, who is an engraver and cartographer. He also produced water charts and town plans in addition to larger maps and atlases. The Canada Map is part of the Historical Maps, Atlas of Canada series that has other maps that were published between 1639 to 1949.

This antique map of Canada can be ordered in a range of finishing options. You can get the map in paper, matte plastic, matte plastic with rails, and lamination. The size of the map is 15.25 x 12 inches.

Bring the Map in Use

Natural Resources Canada (NRCan) heads the Department of Natural Resources, which is under the ministry of the government of Canada. The company is responsible for handling natural resources, energy, mineral and metals, forests, earth sciences, mapping and remote sensing. NRCan also uses its expertise in earth sciences to build and maintain an updated knowledge base for our landmass and resources.