This map is available in 19 x 14 in. Please select a finish of your choice
Please wait, adding to your cart
Please wait, initializing the product
Add to Compare 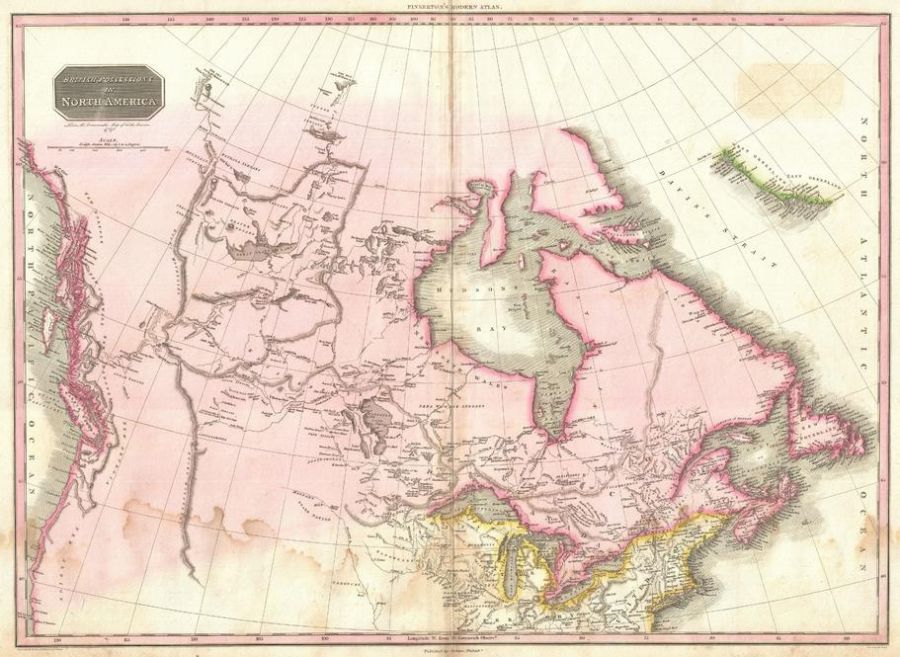 This Pinkerton map of British North America (Canada) is an extraordinary map of the British Possessions in North America from 1818. This presentation was designed by Scottish antiquarian, historian, cartographer and one of the leading masters of the Edinburgh school of cartography John Pinkerton (February 17, 1758 – March 10, 1826).

This map follows roughly 100 years of vigorous exploration of the region by explorers who searched for a navigable river and lake route from the Great Lakes to the Pacific.

The research details numerous river systems and lakes, some real, some fictional, between Hudson Bay and The Rocky Mountains.

Containing notation throughout, such as ‘great quantities of coal in this creek’ and ‘Knistineaux war route’, the map displays the Missouri River as far as the Mandan settlements where Lewis and Clark wintered. Though the official narrative of Lewis and Clark’s historic journey had not been published when this map was in production, it is possible that Pinkerton had access to some preliminary accounts. Names several sightings of the Arctic Sea, by the explorers Mackenzie and Hearne in the 18th century. The west coast, including Vancouver Islands, is particularly well mapped.

Artokoloro has been actively dominating the independent publishing, bookselling, art dealing and selling rights. The company is a reputed name in selling rights of art, culture, history, nature and travel images. Artokoloro also publishes ebooks, and also has a vast collection of antique, historical maps of the world, and is the owner of Liszt Collection and offers print-on-demand services for cartography for people.