Buy this Great Lakes map poster that highlights both the physical and political features of the region and its surrounding areas. Relief shading and different color hues are used throughout the map to depict the height above sea level. You can purchase this high-quality map in a variety of finishing materials including paper, matte plastic, and lamination. It can be used as referential wall decor in homes and offices.
This map is available in 22 x 17 in. Please select a finish of your choice
Please wait, adding to your cart
Please wait, initializing the product
Add to Compare 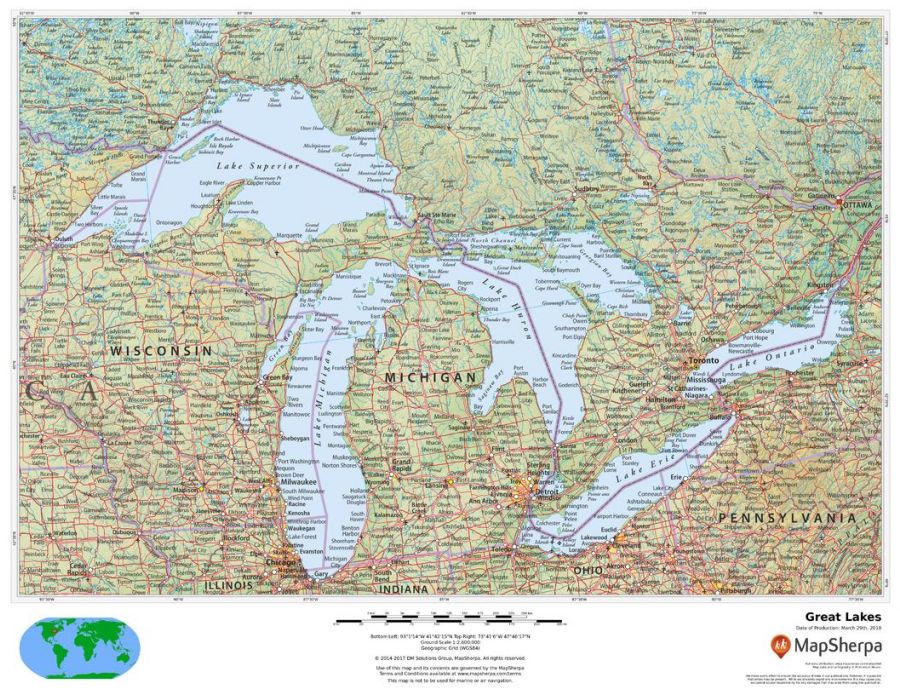 This detailed Great Lakes region map shows all political and physical features of the lakes and surrounding areas. Relief shading and terrain markings include mountains, nearby water bodies, and gulfs. Neighboring states of Wisconsin, Michigan, and Pennsylvania are also visible on the map.

The high-quality print of this map makes it perfect for wall display in office spaces, educational institutions, and homes. It also makes an appealing gift for your friends and loves ones. You can buy this map in different high-quality finishes like paper, laminated, and matte plastic.

Where is the Great Lakes located?

The Great Lakes are interconnected freshwater lakes located primarily in the upper mid-east region of North America on the Canada-US border. They comprise of Lakes Superior, Michigan, Huron, Erie, and Ontario. These 5 lakes lie in separate basins but form a single, naturally interconnected body of freshwater within the Great Lakes Basin. They form a chain that connects the east-central interior of North America to the Atlantic Ocean.

The nearby region of the lake is called the Great Lakes region, a bi-national Canadian–American region that includes parts of the 8 US states of Illinois, Indiana, Michigan, Minnesota, New York, Ohio, Pennsylvania, and Wisconsin and the Canadian province of Ontario.

This region is known as a global leader in advanced manufacturing and research & development because of the accessible waterways, highly developed transportation infrastructure, finance, and a prosperous market base. There are numerous world's largest employers that began in the Great Lakes region.

Other than this, the lake is also a major source of transportation, migration, trade, and fishing. It serves as a habitat for many aquatic species in a region with much biodiversity.