The fascinating world of astronomy illustrated in detailed charts of the solar system.

This map is available in 38.75 x 27 in. Please select a finish of your choice
Please wait, adding to your cart
Please wait, initializing the product
Add to Compare 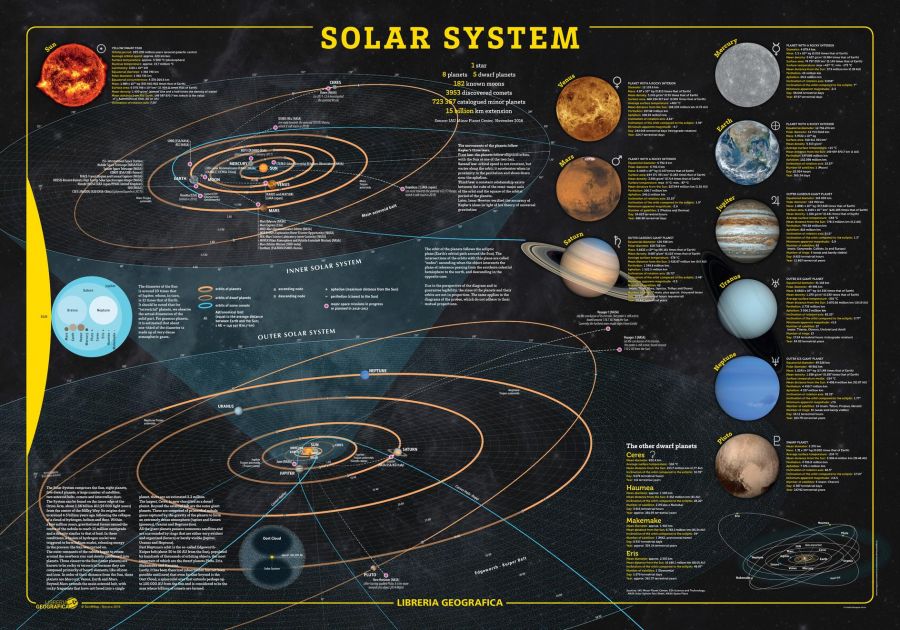 The fascinating world of astronomy illustrated in detailed charts of the solar system.

What does the map cover?

About the other elements shown on the map

The map clearly shows our solar system in different outlooks. You can find detailed charts of the important features that are part of this giant system. Of all the heavenly bodies we know, the key celestial elements are described below. Sun or the Yellow Dwarf Star as shown on the poster is actually a main-sequence star or G dwarf star, or more imprecisely, a yellow dwarf. The dwarf planet is a celestial body resembling a small planet but is neither counted as a true planet nor considered a natural satellite.

In addition to these, there are Comets and Minor planets that are important components of the Solar System. The former one is a cosmic snowball of frozen gases, rock and dust that orbit the sun, and the latter one can be a dwarf planet, asteroid, trojan, centaurs, Kuiper belt objects, and other, and other trans-Neptune objects.

Detailed descriptions and imageries of the 9 planets: (Mercury, Venus, Earth, Mars, Jupiter, Saturn, Uranus, Neptune, Pluto) along with proper labeling in readable fonts make the poster ideal for the referential purpose. Interesting facts and figures are also included on the poster.

The solar system wall map can be purchased in size 39.5 x 27.75 inches in varied finishing options. You can choose from laminated, paper, and matte plastic with rails.

Browse maps by Geo4Map at MapTrove digital store and order online in a range of styles, sizes, and finishes. Other than cartographic products, the company also sells tourist products, editorial products, special initiatives, and more.