Wall map of the world with a twist! An alternative view of the World with this wall map with everything turned on its head raising the questioning conventional wisdom and asking which way is truly up?

This map is available in 39.25 x 27.5 in. Please select a finish of your choice
Please wait, adding to your cart
Please wait, initializing the product
Add to Compare 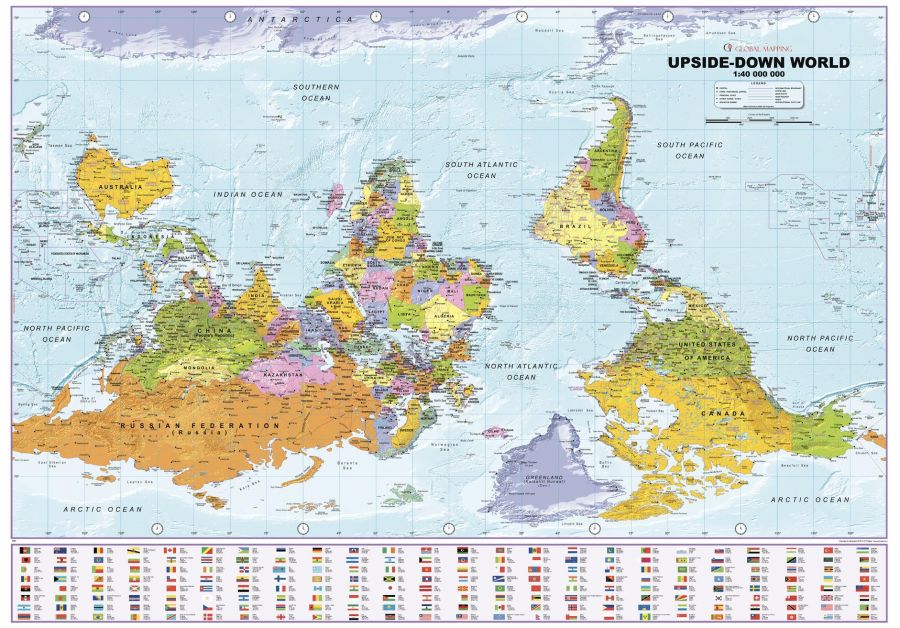 About the Upside Down World Map

A vibrant, highly-detailed map of the world with everything flipped over is this upside down world map poster. The south-up map orientation is unique because it shows the south at the top of the map and amounts to a 180 degree rotation - unlike the standard convention of the north-up. Maps in this orientation are usually called the upside down maps, just like this one or simply called as reversed maps. Crucial political features are highlighted on this map include countries, capitals, cities in legible texts and an additional panel at the bottom of the map shows country flag symbols for identification.

Idea behind the map

As per research and studies, the north-south positions on maps have psychological consequences. How? Because the north is largely associated with richer people, more expensive real estate, and higher altitude, while south is associated with poorer people, cheaper prices, and lower altitude.

While some contexts also mention that there is some sort of authentic value attached to it. The north side or the top implies future of prosperity for all. Also there is an observation that mentions that the pole star only appears in the northern hemisphere and there is none over the southern hemisphere.

Throughout history, there have been map compositions that have been made in different orientations since doing so is technically easy but there is no specific thought that is put behind it. This map give an insight to an alternative view of the World with everything turned on its head raising the questioning conventional wisdom & asking which way is truly up?

The map is available for purchase on MapTrove.ca. You can order the map in lamination, matte plastic and lamination. The map can be used as a study material and for references.