This map is available in 28 x 22 in. Please select a finish of your choice
Please wait, adding to your cart
Please wait, initializing the product
Add to Compare 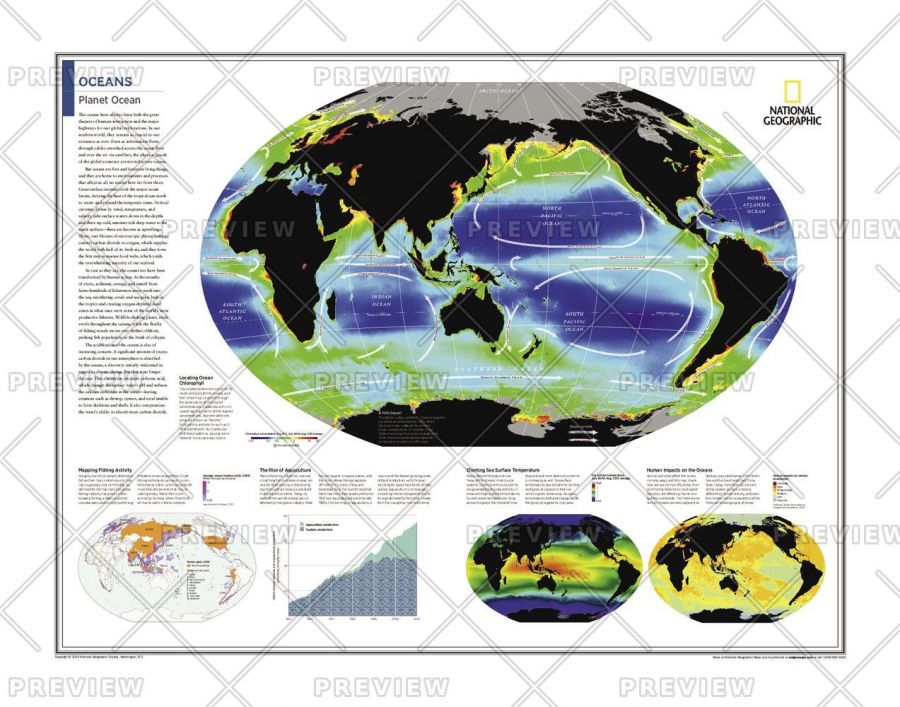 More about the world map oceans and seas

This is a colorful map that comes with informative notes on risk factors and other important issues that the oceans and other water bodies undergo. The map shows the spherical earth with areas highlighting data related to oceans.

Major Issues affecting the Oceans of the world

This is an intuitive map that covers information on human impacts on oceans and the gradual slowdown in the percentage of world oceans. The map shows Mapping Fishing Activity; The Rise of Aquaculture; Charting Sea Surface Temperature and Human Impacts on the Oceans

There are single-celled algae and other plant-like organisms known as phyto-plankton at the base of the ocean food web. The way plants are on land, phyto-planktons use chlorophyll and other light-harvesting pigments to carry out photosynthesis, absorbing atmospheric carbon dioxide to produce sugars for fuel.

Aquaculture is the process of breeding, raising, and harvesting fish, shellfish, and aquatic plants. In other words, it is the farming of fish, crustaceans, molluscs, aquatic plants, algae, and other organisms. The aquaculture process in U.S is an environmentally responsible source of food and commercial products as it helps in creating healthier habitats, and is used to rebuild stocks of threatened or endangered species.

The sea surface temperature is the water temperature close to the ocean's surface. Though the actual meaning of the surface varies but it is somewhere close between 1 millimetre (0.04 in) and 20 metres (70 ft) below the sea surface.

Human beings have deteriorated this natural resource in a big way but the main areas of human impact can be divided into those related to ocean pollution, habitat destruction. This also includes human behaviours contributing to pollution, over fishing, over-harvesting, boating, agricultural runoff and coastal development.

Buy world map and oceans map online at MapTrove in laminated, matte plastic and paper. This National Geographic map is a great information resource and one can use it for studies and surveys. Also, the wall map can be used to add up to office and home walls.