This detailed map of Brazil is fittingly one of the largest maps available of the largest country in South America. It shows thousands of places including state capitals, primary and secondary towns, political boundaries, important infrastructure, and all key landforms. You can use this map in your homes and offices for referential purposes or you can gift this map to a map lover or Brazilian expatriate.
This map is available in 41 x 38 inches. Please select a finish of your choice
Please wait, adding to your cart
Please wait, initializing the product
Add to Compare 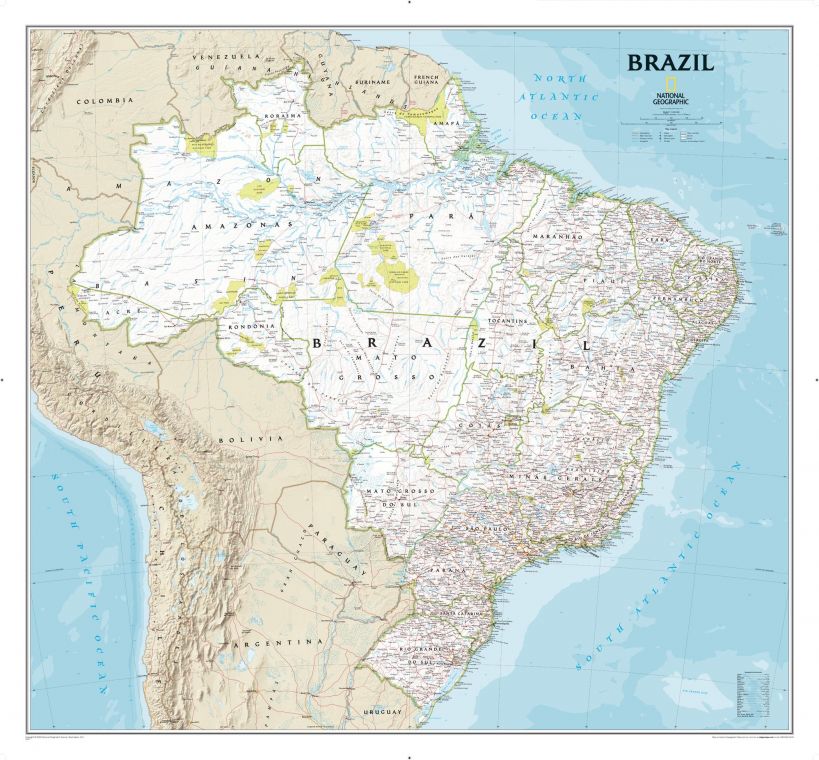 This detailed map of Brazil highlights exceptional details about the country including the coastal islands that make up Fernando de Noronha National Marine Park, Abrolhos National Park, and Arquipelago dos Abrolhos. You can find thousands of places including state capitals, primary and secondary towns, political boundaries, important infrastructure, and all key landforms marked clearly on this map.

The country's national parks & reserves are highlighted and labeled, as is the country's rich network of rivers that feed the Amazon, the world's second-longest river.

You can get this map delivered to your doorstep in a selection of finishing materials like paper, matte plastic, and laminate.

Brazil is the largest country in both South America and Latin America. It borders all South American countries except Ecuador and Chile. And with a coastline of 7,491 kilometers (4,655 mi), it bounds the Atlantic Ocean on the east.

Other than that, it also encompasses a number of oceanic archipelagos like Fernando de Noronha, Rocas Atoll, Saint Peter and Paul Rocks, and Trindade and Martim Vaz. Also, it is the only country in the world that has the equator and the Tropic of Capricorn running through it.

The country's urban areas concentrate 84.35% of the population and the Southeast region remains the most populated one. Five of the largest cities in the country are listed below:

You can buy customizable maps of these cities by clicking on their respective names above.