The Four Corners U.S. Map is designed with cartographic excellence by expert map makers of The National Geographic. It accurately depicts the famous Four Corners region of the USA which includes the state of Colorado, Utah, New Mexico, and Arizona.

The Map is a part of the Atlas of the World, 10th Edition, and encompasses political boundaries of each state with state names, prominent physical features, primary cities within this region, and interlinking road network. Portrayed in subtle colors tones this map makes an attractive and informative display in any space. 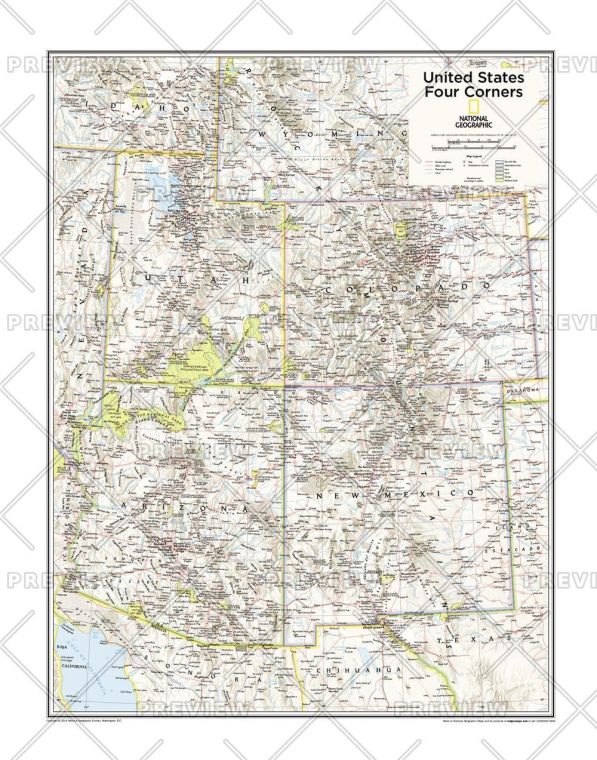 This Four Corners U.S. Map provides a detailed outline of the Four Corners region of the United States. This region is marked by the intersection of four states namely Colorado, Utah, New Mexico, and Arizona. State names are captioned and their boundaries clearly demarcated with dark line margins. International boundaries are also highlighted for easy understanding.

Provincial capitals, major towns, and cities are named and accurately marked with readable fonts. Significant physical features like water bodies, mountains, and national parks can be spotted easily. Names of bordering states which are not part of this region can also be placed with ease. Integrated networks of roads and highways that connect the region add to this elaborate layout.

This map is an instant favorite and is widely used because of its attractive color tone, intricate detailing, high-quality print, and price valuation. It is a part of the Atlas of the World, 10th edition, and is designed by National Geographic which adds authenticity to this piece.

State boundaries are demarcated with yellow lines and captioned in large fonts. State Capitals are named indicating their placement. More than a hundred primary cities and major towns are also marked in their true location throughout the map extent.

Colorado: The territory of Colorado is landlocked on all sides by other States. Wyoming can be seen bounding the state from north. Kansas can be placed on the east and Utah on the western border.Oklahoma and New Mexico border the state from the south. Arizona can also be placed in the southwestern tip in a small point of intersection.

Utah: Utah is landlocked on all four sides with Colorado to the east, Wyoming to the northeast, and Idaho to the north. The States Arizona and Nevada can be seen sharing a border to the south and west respectively. New Mexico can be placed at a point of intersection in the southeast.

Uses of the map

Meticulous detailing and soothing imagery make this Map of Four Corners with cities ideal for display and reference in educational institutions, offices, and Home studies.