The Northwestern U.S. Map elaborates on the physical and political attributes of the region. Also known as the American Northwest this informal geographic region includes the states of Idaho, Montana, Oregon, Washington, and Wyoming. State names, capitals, and many primary cities are captioned to indicate placement. State boundaries and international divides are indicated with dark line margins.

Significant terrain features are marked and the transportation networks are illustrated with numbering and color coded route charts. Designed by National Geographic this map makes an exceptional exhibit and is a part of Atlas of the World, 10th Edition.

This map is available in 28 x 22 in. Please select a finish of your choice
Please wait, adding to your cart
Please wait, initializing the product
Add to Compare 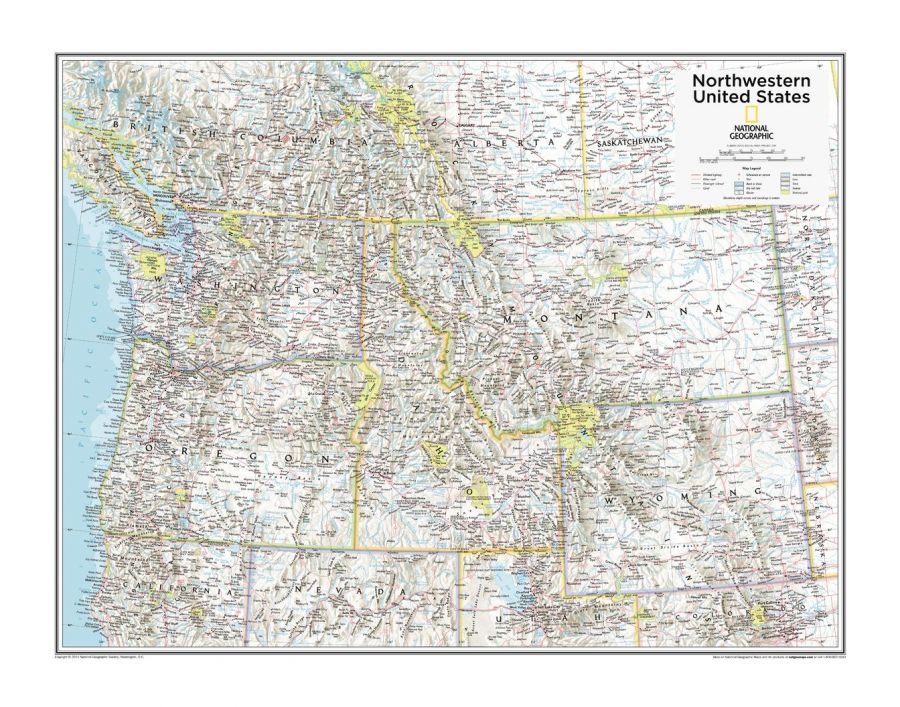 Modeled in soothing tones, the Northwestern U.S Map stands out for its descriptive nature and attractive color schematics. It elaborates on the political and physical description of the informal geographic region also known as the American Northwest. Idaho, Montana, Oregon, Washington and Wyoming are the five states that constitute this sector.

Sate names are captioned and depicted in their true proportion. International and federal boundaries are projected with dark line margins. Significant terrain markings like oceans, mountains, lakes, rivers and valleys are accurately placed and can be identified at a glance.

The transportation network of this sector is sketched out neatly with numbered highways, color coded route chats and symbolic indications of airport locations. The map is also a part of the Atlas of the World, 10th Edition. This comprehensive map of the Northwestern US is designed by National Geographic, is a preferred piece being widely used.

More about the Northwestern States of US

The Northwestern Region of the United States encapsulates five federal divisions which are Idaho, Montana, Oregon, Washington and Wyoming.

Idaho: Capital city Boise is the largest settlement of the State. Idaho has 29 Counties, the largest county by area is Idaho County and the largest in terms of population is Ada County. The Range of Zip codes in the state of Idaho is from 83201- 83877.

Montana: The State of Montana derives its name from Latin word for “Montanea” meaning mountainous country. It is the fourth largest state of the US in terms of land area however the 8th least populous. The Capital City is Helena and the largest city Billings. Montana is divided into 56 counties and the range of Zip codes is from 59001-59937.

Wyoming: Wyoming is the second most sparsely populated state of The US but the 10th largest in terms of area. Wyoming has 23 Counties and Cheyenne is the capital of the state.. The Range of Zip codes in Wyoming is from 82001-83414.

Uses of the map

This Large Wall Map of Northwestern United States has been designed with cartographic excellence and aims to bring information to your doorstep, packaged in style. With its unique color schematics and a decorative border, this map adds an instant spark to a dull wall.

The map has been designed meticulously and can be used resourcefully for referential purposes in Educational institutions, office spaces, and homes.