Perfect for home, offices and schools, this map of the Arkansas is modeled in lively colors, depicting the urban layout of the State. The expanse of the State is elaborated with placement of hundreds of cities and towns. State capital Little Rock and some major settlements are elaborated in insets. It shares information on the transportation network of the state.

The Mississippi alluvial plain, Crowley’s Ridge, Ozark Mountains, Ouachita Mountains and the Arkansas River are some prominent physical features of the state. Arkansas is home to many national parks and these areas have been indicated with clarity. 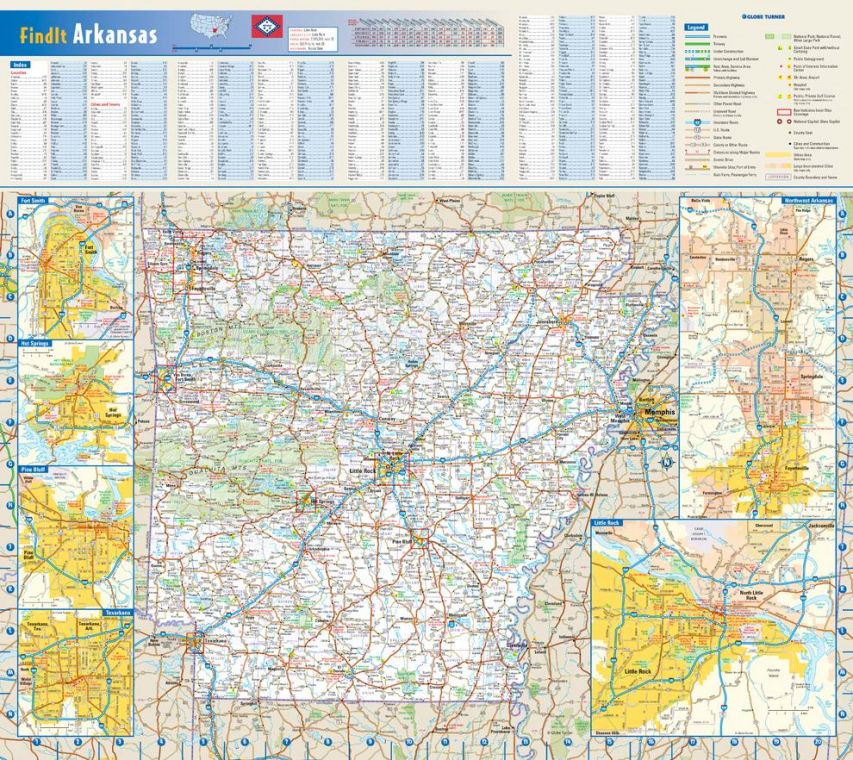 Designed with accuracy using current map data, this Map of Arkansas is a high quality image of the urban layout of the state. Boundaries with other states are demarcated with contrasting contour. All primary and secondary cities and towns are named in their true location for easy understanding.

Highlighted box frames indicate placements of major settlements which are elaborated in separate insets. The State Capital Little Rock is captioned in bold readable fonts and can be placed easily. National highways, state highways, airports, military installation and recreational areas are other details that are included in the map. The physical landscape is depicted with attractive imagery and variation in color.

Mountain ranges, highlands, significant water bodies, mountain peaks, forestlands, national parks and State parks can be placed on the frame with ease. This informative and attractive visual display of the State is a great reference tool and can be used resourcefully in schools, homes and offices.

Capital city Little Rock can be placed on the south banks of the Arkansas River. It is also the most populous city of state. The Fayetteville- Springdale- Rogers Metropolitan Area, is the fastest growing metropolitan of the state and the second-largest.

The physical landscape is depicted with attractive imagery and variation in color. Mountain ranges, highlands, significant water bodies, mountain peaks, forestlands, bayous, national parks and State parks can be placed on the frame with ease. Ozarks, Boston Mountains and SpringField Plateau can be found in northwestern Arkansas.

This region also encompasses Ozark National Forest, Buffalo National River and wilderness area. Many wildlife refuges can be placed in the Northeastern part of the state.

Piney woods and the famous bayous Bartholomew can be distinctly placed in southeastern Arkansas along with the Mississippi River State Park. Pine, Hickory and Oak forest, Hot Springs National park, Lake Ouachita are marked distinctly in the southwest region of the state.There are 7 National Parks in Arkansas and they can be identified with prominence within the map extent.

The map is furnished with a tabular city/ town index, a county index and a driving distance marker which help locate all primary and secondary towns on the map.

This Map poster is ideal for reference use because of its accurate data and clear depiction of the State’s urban layout. It is available in four different finishes which include, paper, Matte Plastic, laminated and Canvas in high quality prints.