This large scale thematic map of Connecticut enables an easy orientation of urban space. Connecticut is the third smallest state in terms of area and the fourth most densely populated state in the USA.

The map is also furnished with a tabular index of towns/ cities and county. A driving distance marker, miniature map of the United States pinpointing the placement of Connecticut and digitized flag of the State.

This geographical guide comes in high quality print with various finishing options. With attractive imagery and comprehensive detailing the map makes a great tool for reference. 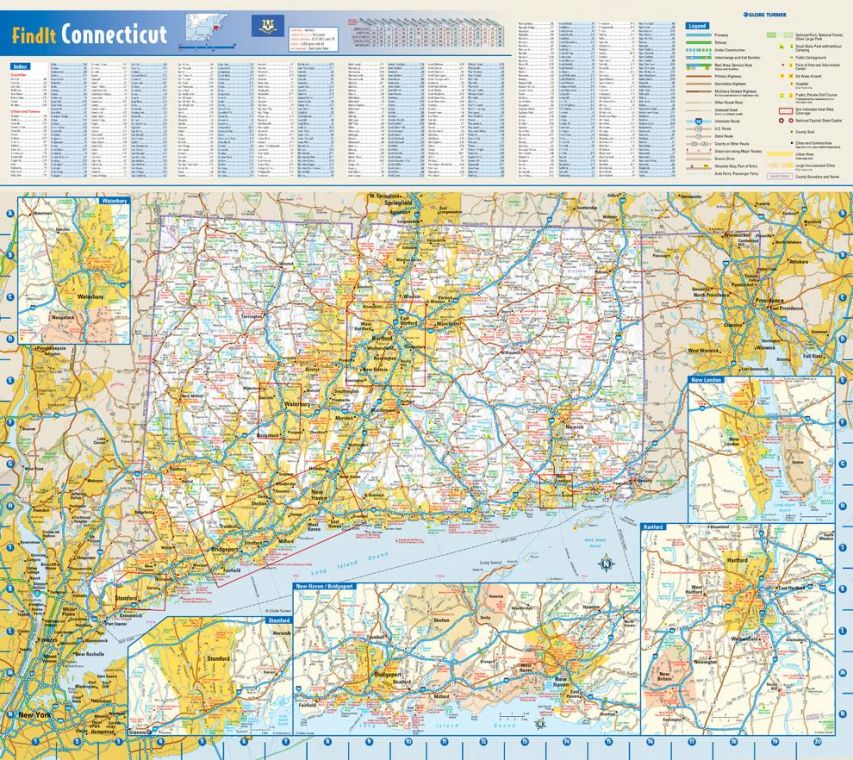 The State of Connecticut derives its name from a “Mohegan” word meaning “Place of Long tidal river”. The visual organizer features the urban geography of the state inviting curiosity and learning. Political boundary with other states is clearly depicted with colored contours and defined margins.

The state capital, Hartford and names of other primary settlements and secondary towns and cities are printed in readable fonts and are easily identifiable. Road network, thoroughfare, frees and tollways are presented with specific numbering and thread markings. The map layout shows the Long Island Sound and includes inset maps of major urban settlements like Hartford, New Haven- Bridgeport, Stamford, New London and Waterbury. Major terrain markings, airports locations, points of interest and historical sites are other details of this intricate layout. The map is also furnished with a tabular index of towns and cities, a county index and driving distance chart marked in miles, which helps locate all primary and secondary towns on the map.

Important urban concentrations like State capitol Hartford, New Haven- Bridgeport, Stamford, New London and Waterbury are drawn out separately on insets. Information provided by these city maps include street network, points of interests, administrative building, parks and other landmarks. Highlighted box markings and prominent captioning also indicate their placement in the state canvas. 100s of other primary and secondary cities and towns are named in their true location for easy understanding. The expanse of the title frame is elaborated with terrain placements and interlinking networks of highways and state roads. Airports, railroads and harbors are also marked prominently. Political demarcations with bordering States are specified with contrasting tones.

The Long Island Sound, a tidal estuary of the Atlantic Ocean lies to the south of Connecticut. The harbors of New London, Greenwich and New Haven lie in the coastal lowlands. All hills and mountains in Connecticut are a part of the larger Appalachian Range. The highest peak Bear Mountain in Salisbury can be placed on the northwest corner of the state which is a part of the Taconic Mountains. The Connecticut River flows through the middle of the state from north to south. The plain surrounding the river, known as the Connecticut Valley lowlands is also the most populous metropolitan region of the state.

There are 169 incorporated towns in Connecticut. The capital Hartford is highlighted in a box frame on the state canvas and elaborated in an inset. The most populous city is Bridgeport followed by New Haven and Stamford. Many other primary and secondary towns are also marked on the frame for quick reference.