This reference map of Illinois is a handy reference piece ideal for map collectors, and travel enthusiasts. It presents an overview of the urban space and provides valuable geographic information of the state. The topography, transportation network, names of cities and state boundaries, feature in the map with accuracy.

This map is available in 27.75 x 25 in. Please select a finish of your choice
Please wait, adding to your cart
Please wait, initializing the product
Add to Compare 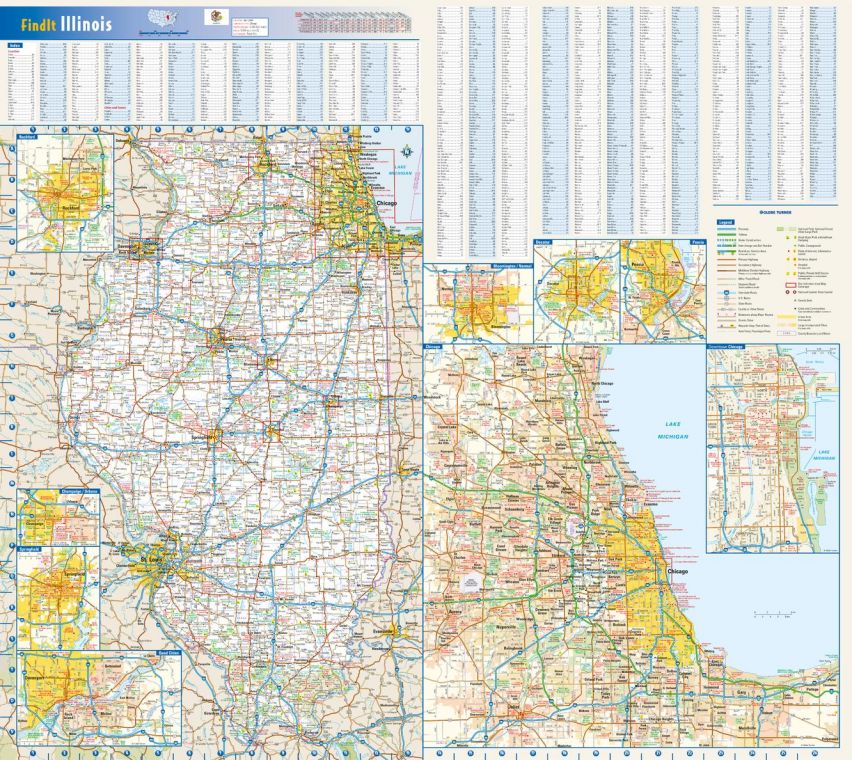 The map of Illinois depicts the urban layout of the state with rich imagery designed in planimetric style. The state capitals, major towns and cities are named and accurately marked in the map with readable fonts. Route charts of interstate, national and state highways are illustrated with specific numbering and color coded thread markings . Freeways, tolls ways and other major roads are also drawn out clearly.

Terrain features are marked with preciseness and captioned with clarity. Airports locations, national parks, state parks, recreational areas and other points of interest are indicated for easy understanding. Separate frames highlight an elaborate know-how of cities which include Chicago, downtown Chicago, Bloomington/Normal, Peoria, Decatur, Rockford, Champaign/Urbana, Quad Cities and State capital Springfield. The map is also furnished with a city town index, County index, distance markers, miniature map of the US indicating the placement of Illinois along with a digitized flag of the State.

This informative and attractive piece of cartography designed by experts of Globe Turners can be ordered in four different finishes which include Paper, Matte Plastic, Laminated and Canvas in high quality prints.

Northern part of Illinois is dominated by the Chicago Metropolitan area which includes Chicago and its suburbs. It is the third largest Metropolitan of the nation. .Central Illinois are mainly prairie and this area includes the state capital Springfield, Quincy, Decatur, Bloomington-Normal and Champaign-Urbana. Southern Illinois consists of Kaskaskia and suburbs of St Louis.