This reference map of the Mississippi presents an overview of the urban space. The state gets its name from the Mississippi River which flows along the western side of the state. All primary and secondary cities are named and placed accurately in their true location.

The state capital Jackson is captioned in bold and easily identifiable. The elaborate road network interlinking the entire state is depicted with numbers and color-coded thread margins. It also highlights the placement of three major settlements which include the Biloxi/Gulfport metropolitan area, Vicksburg and Hattiesburg with box frames.

This map is available in 16.75 x 16.75 in. Please select a finish of your choice
Please wait, adding to your cart
Please wait, initializing the product
Add to Compare 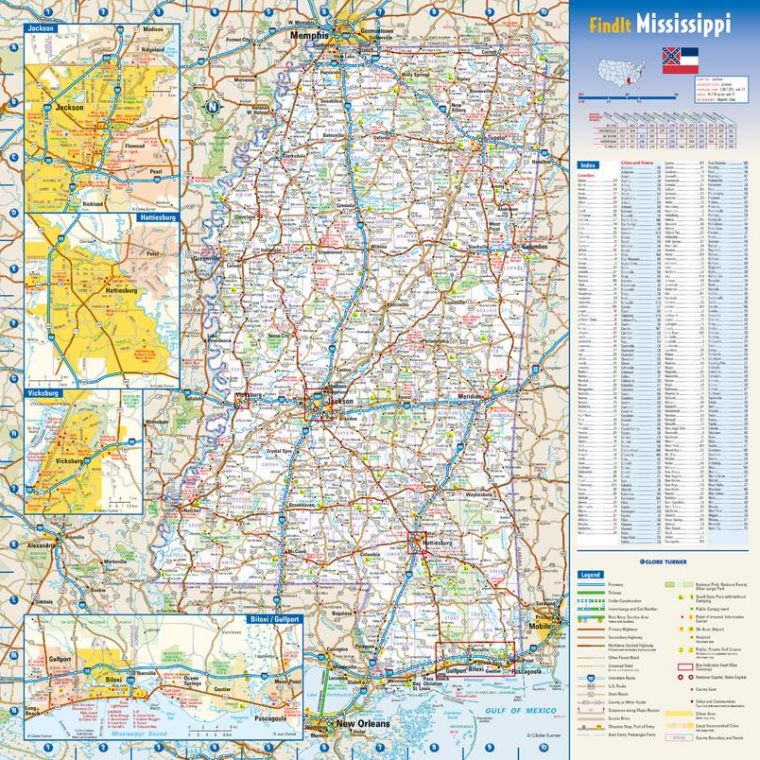 The Mississippi Map depicts the physical and political layout of the state with rich imagery and high-detail cartography. The map shows state demarcations along with placements of primary cities, secondary cities, airports, national parks, state parks, and recreational areas.

The detailed city layout of these settlements are projected in separate insets for easy understanding. Boundaries with other states are demarcated with different color shades and outlines. Points of interest, thoroughfares, freeway tollways, interchanges, and airports are marked prominently for quick reference.

This visual organizer also provides detailed information on the topographical layout of the state. The Gulf coastal plains cover most of the state with low plains and low hills. The highest summit of the state Woodall Mountains are captioned and can be placed with ease.

A tabular index on cities/towns and counties and a driving distance chart based on accurate information and map data makes this map perfect for general reference.

National and state highways are specifically numbered and can be identified in a glance. Separate frames highlight an elaborate know-how of major settlements which includes the city layout of Jackson, the state capital, the Biloxi/Gulfport metropolitan area, and major cities of Vicksburg and Hattiesburg. Physical attributes like mountain peaks, rivers, lakes and plains can also be located with ease.

The map is also furnished with a city with a detailed index of city /town, a county index and a driving distance chart which helps estimate the distance between two destinations. Other interesting features of the map include a miniature map of the US indicating the placement of Mississippi and a digitized flag of the State.