This reference map of Nevada is a handy reference piece and presents an overview of the urban space along with valuable geographic information. The topography, transportation network, names and placement of all cities and state boundaries, feature in the map with accuracy.

This informative and attractive piece of cartography designed by experts of Globe Turners can be ordered in four different finishes in high quality prints.

This map is available in 16.75 x 17.75 in. Please select a finish of your choice
Please wait, adding to your cart
Please wait, initializing the product
Add to Compare 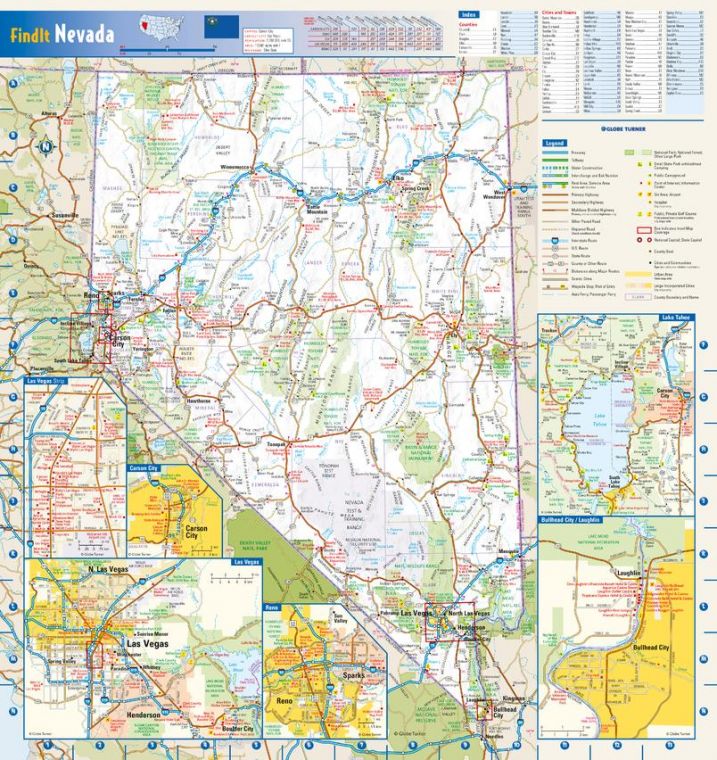 Nevada derives its name from a Spanish word meaning “ Snow Covered”. It is officially nicknamed as the "Silver State" because of the importance of silver to its history and economy.

The map of Nevada depicts the urban and physical layout of the state with rich imagery designed in planimetric style. The state capital Carson City and major towns and settlements are named and accurately marked on the map. Route charts of interstate, national and state highways are illustrated with specific numbering and color coded thread margins.

Separate frames highlight an elaborate know-how of cities and major which include Las Vegas, Las Vegas Strip, Lake Mead Recreational Area, Carson City, Laughlin, Reno and Lake Tahoe The map is also furnished with a city town index, County index, distance markers, miniature map of the US indicate the placement of Nevada along with a digitized flag of the State.

Nevada is the ninth least densely populated state of the nation and most of its population is centered around Clark County. The economy of the state is led by the tourism sector followed by mining and Cattle ranching.

A tabular index on cities and counties and a driving distance chart based on accurate information and map data helps locate all towns and cities on the map.