The Physical Map of Oregon brings out the diverse topography of the state with hand painted relief features. Comprehensive detailing of physical attributes from the volcanoes, high deserts to semi-arid shrublands and coastal areas makes it ideal for reference.

National Geographic, the global mapmakers, have designed this map with accuracy and carefully researched data which adds authenticity to this piece.

This map is available in 40.25 x 30 inches. Please select a finish of your choice
Please wait, adding to your cart
Please wait, initializing the product
Add to Compare 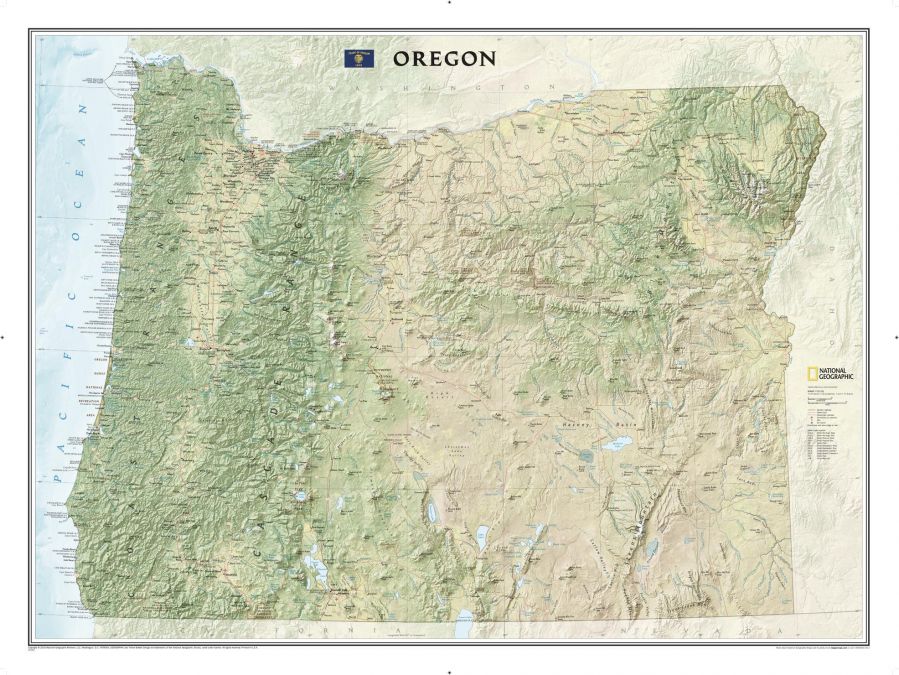 Designed by the best cartographers of National Geographic, the Map of Oregon presents rich imagery of the State’s diverse terrain. The unique merger of land features like the rugged mountain ranges, the coastal region and the high deserts is represented with shaded relief and wrinkled folds.

The Crater Lake, Columbia River, Snake River, Mount Hood, Columbian Plateau, Cascade Range, Klamath and Blue Mountains can be easily placed on the frame. The state capital Salem and other primary and secondary towns are labeled with clarity. Political boundary with other states is depicted with contrasting color tones and can be identified at a glance.

National and state highways are indicated with thread markings along with airport locations. Other features of the map include National parks, State parks, recreational areas and an elaborate legend that simplifies symbolic data.

Boundaries with neighboring States, State capital Salem and innumerable towns and cities are notably labeled and accurately marked in their true location.

Other aspects of the map include the highway system, airports, recreational area and landmarks. An elaborate key table simplifies symbolic data of the title frame for easy understanding.

Oregon is the 9th largest and the 27th most populous state of the USA. The capital, Salem is the second most populous city while Portland is the largest and the most populous city of Oregon. The population concentrates around Willamette Valley. Eugene, Hillsboro Gresham and Beaverton are other major cities that can be placed easily. The state of Oregon is divided into 36 Counties. Multnomah is the most populous county and Harney is the largest county in terms of land area. Other Urban placements include primary and secondary cities and towns, highways, recreational areas, points of interest and airports.

The map of Oregon depicts the diverse physical features of the state with preciseness and accuracy. The state is divided into six geographical regions which are the Coast Range, the Willamette Valley, the Cascade Mountains, the Klamath Mountains, the Columbia Plateau, and the Basin and Range Region The intricate river system includes Columbia River, Deschutes, Willamette River, John Day River, and Snake River. The highest point of Oregon is Mount Hood and the two major lakes are Upper Klamath Lake and Crater Lake.