The terrain cover and urban placements are represented with well-defined cartography and accurate data in the Texas State Map.

It also encompasses the urban layout with placement of all primary and secondary cities and networks of highways.

The map features also include multiple insets elaborating the cityscape of Downtown Dallas, Houston and San Antonio. A separate inset brings out the detailed layout of Big Bend National Park.

This map is available in 34.5 x 24.75 in. Please select a finish of your choice
Please wait, adding to your cart
Please wait, initializing the product
Add to Compare 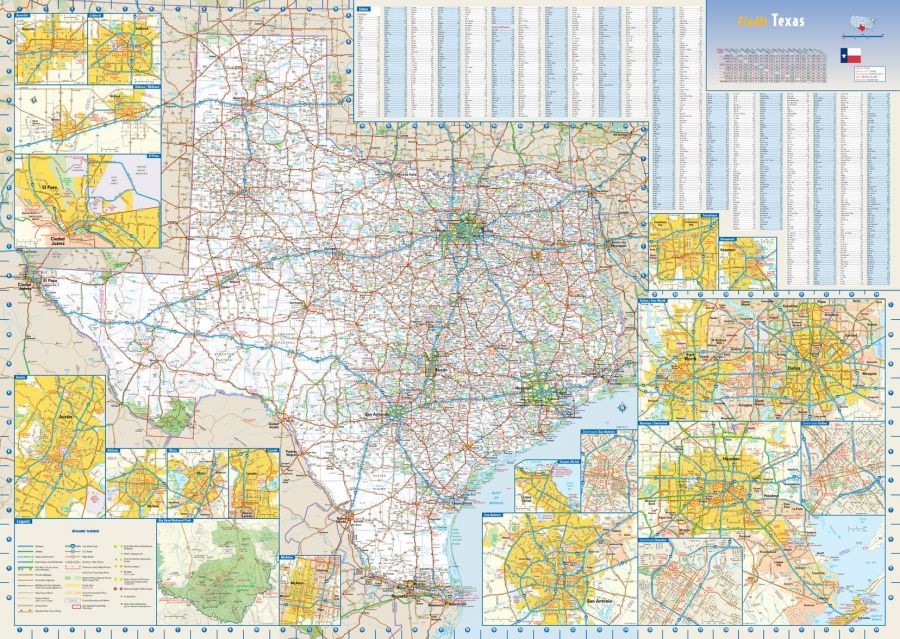 The Texas State Map depicts the physical and political layout of the state with in-depth factual detailing. In planimetric layout the map shows international demarcations, state boundaries with contour lines and contrast. The State capital Austin along with marking of primary cities, secondary cities and airports are marked in their true location.

All National Parks , State Parks, protected areas and recreational areas are easily identifiable with green cover patches. Physical attributes include mountain peaks, plateaus, desert, plains, rivers, lakes, sand hills, prairies and the Gulf of Mexico. Primary and secondary highways are specifically numbered and can be identified at a glance. The map is also furnished with multiple insets depicting the cityscape of Downtown Dallas, Houston and San Antonio and other major urban settlements Big Bend National Park is also depicted in a separate inset. Other features of the map include city town index, County index, distance markers, miniature United States locator indicating the placement of Texas and a digitized flag of the State.

This comprehensive Texas state map poster comes in high quality print with various finishing options. It is furnished with An elaborate legend and two detailed indices of towns /cities and county. A driving distance marker helps estimate distance between towns and cities marked on the map.

The map face also provides the Country placement of Texas along with digitized flags of the state. This urban political map of Texas aims to broaden our knowledge about the state with visual learning and well researched data.