Wisconsin is located in the great lake region of the United States and gets its name from the Wisconsin River. Wisconsin is nicknamed “ America’s Dairyland” as it is one of the leading producers of dairy products in the country.

The state of Wisconsin is graphically represented with cartographic excellence depicting the urban placements. The expanse of the map is elaborated with location of towns, cities and boundaries demarcations. Other urban markings on the map include detailed transportation networks,inset map coverage of urban settlements with details of road network airports locations and points of interest Clear labeling and simplified symbolic data, makes this map perfect for business, homes and offices. 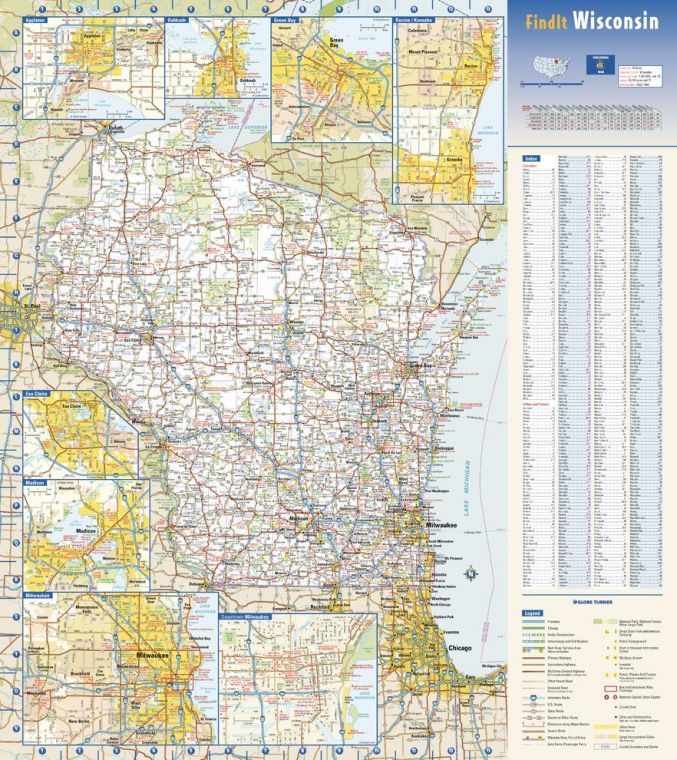 Wisconsin is located in the great lake region of the United States and gets its name from the Wisconsin River.

Designed with accuracy using current map data, this Map of Wisconsin is a high quality image of the urban layout of the state. Boundaries with other States are identifiable with contrasting contour. The map encompasses all primary and secondary cities and towns and a driving distance marker helps understand mile gaps between destinations.

The map is also furnished with a city town index, County index, a driving distance chart and an elaborate legend. Placement of Wisconsin in the national frame is depicted with a miniature map of the US along with a digitized flag of the State.

Most of Wisconsin lives in urban settlements and the Greater Milwaukee metropolitan house one third of it. Capital city Madison and the largest city Milwaukee are prominently marked. All primary and secondary cities are marked in its true location and a driving distance chart helps estimate distances between them.

The placement of important settlements like Appleton, Green Bay, Madison, Milwaukee, Oshkosh and Racine/ Kenosha are highlighted on the frame with red box indicators. Highways are numbered for easy orientation along with rail routes and airport locations.

The map is also furnished with a city town index, County index and a driving distance chart which help locate all primary and secondary towns.