This map of Michigan is presented in warm color with high-detailed cartography. This elaborate layout of the urban space, invites curiosity and learning for all users.

The map of Michigan is also furnished with a city town index, County index, diving distance chart, elaborate legend, digitized flag and a miniature map of the United States pinpointing the placement of the state.

This map is available in 24 x 24 in. Please select a finish of your choice
Please wait, adding to your cart
Please wait, initializing the product
Add to Compare 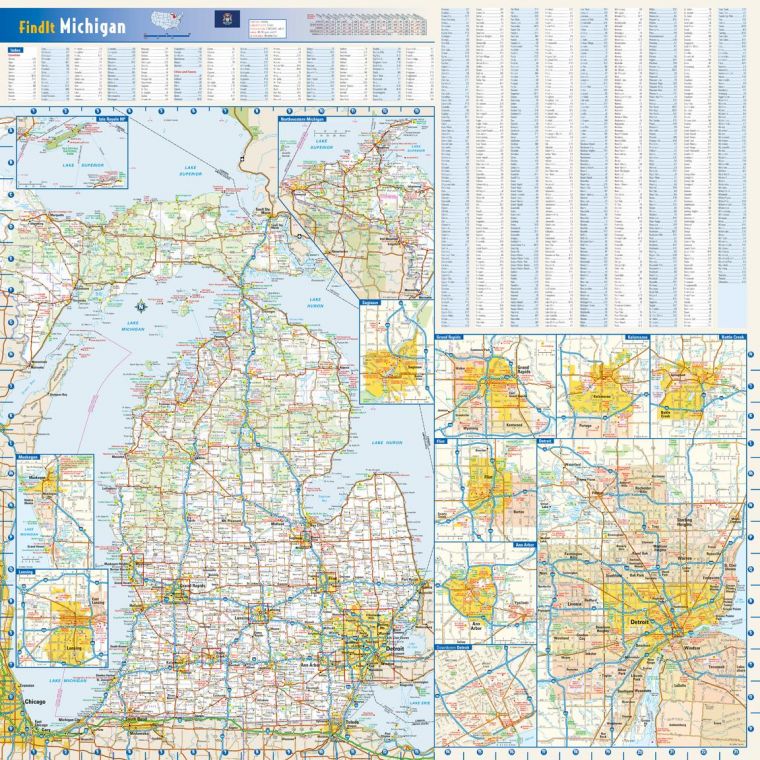 National highways, state highways, airports locations, military installation and recreational areas are other details that are included in the map. Significant terrain placements include intricate river systems, major lakes, mountain peaks, forestlands, national parks and State parks. This map contains the highest level of detailing and aims to bring information to your doorstep, packaged in style.

State and international boundaries are differentiated with contrasting colors. The states capital Lansing and all primary and secondary cities are captioned in readable fonts in their accurate location. Major settlements are highlighted with box indicators and elaborated in insets. The Map also shares information on transportation networks interlinking the state. Interstate, national and state highways are drawn out with different colors and specified with numbering.

The map is also furnished with a city town index, County index and a driving distance chart which helps locate all primary and secondary towns on the map.