This Map of Montana represents the physical and political geography of the state with well researched data. The expanse of the state is elaborated with terrain features, placement of cities and network of highways. It also encompasses the layout of 5 major settlements in separate insets. An additional inset of The Glacier National Park projects the diverse terrain of the region. An elaborate legend, index on cities and counties and a driving distance chart makes this map perfect for general reference.

This map is available in 22.5 x 17.5 in. Please select a finish of your choice
Please wait, adding to your cart
Please wait, initializing the product
Add to Compare 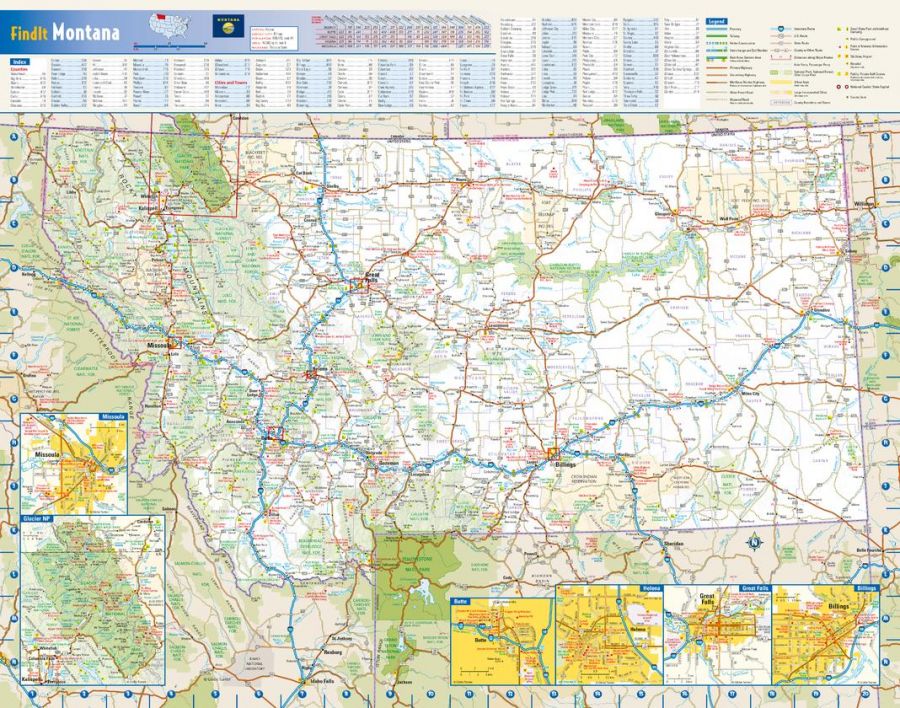 The State of Montana derives its name from Latin word for “Montanea” meaning mountainous country. Montana is often referred to as “ The Treasure State” because of its rich mineral wealth. The State’s motto ‘Oro y Plata’ is the Spanish word for gold and silver which probably came from the huge reserve of these minerals which the mountains of the state hold.

The Map Montana depicts the physical and political layout of the state with in-depth factual detailing. In planimetric layout the map shows state boundaries and international demarcations with line margins and contrasting tones.

Other urban placements include primary cities, secondary cities, airports, national parks, state parks and recreational areas. Physical attributes like mountain peaks, mountain ranges, rivers, plains and lakes can also be located with ease. Significant physical features of the state include the Absaroka, Beartooth ranges and the Rocky Mountain Front which can be placed in the north central part Primary and secondary highways are specifically numbered and can be identified in a glance.

The State of Montana is the fourth largest state of the US in terms of land area however it is the 8th least populous state. The economy of the state is mostly run by the agricultural and tourism sectors. The Capital City Helena, the largest city Billings and all primary and secondary towns and cities are captioned in their true location.

Placements of major urban settlements are highlighted with box indicators and elaborated in insets. It encompasses city maps of Helena, Billings, Missoula, Butte and Great Falls. An additional inset of Glacier National Park is also added to the title frame. Each inset frame is elaborated with latest street information, airport locations and accurate placements of landmarks.

The legend lays out details on major airports, national parks, military installation and highways, important roads and other details of the title frame.