The state of New Jersey was named by the English as the Province of New Jersey after Channel Islands, Jersey. The map entails the political layout with placements of many towns and cities. State capital Trenton, Atlantic City and Downtown Atlantic City are highlighted with box indicators and elaborated in insets.

The territorial demarcation with other states is projected with subtle tones. Terrain features are prominently marked along numbered highways, airports and military installation. The New Jersey map not only makes an excellent tool for reference but is also an attractive display for any space.

This map is available in 18.5 x 25 in. Please select a finish of your choice
Please wait, adding to your cart
Please wait, initializing the product
Add to Compare 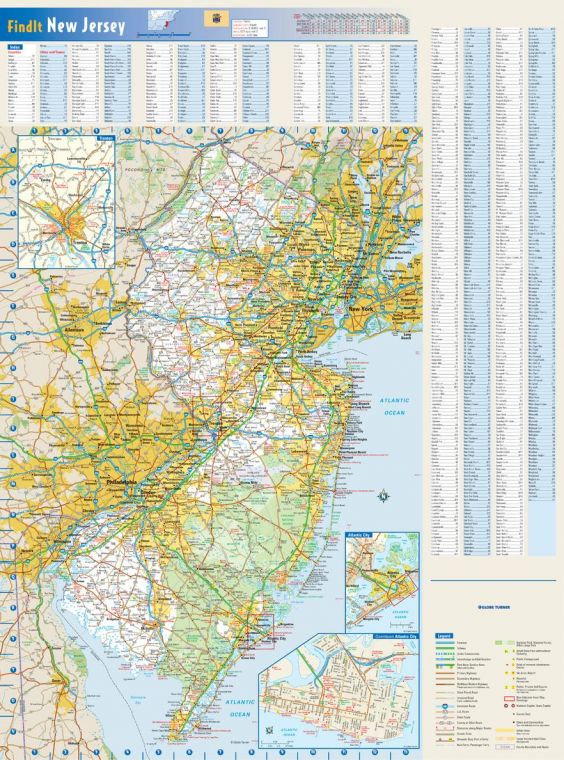 The map of New Jersey is a detailed reference map, projecting the urban layout of the state. State capital Trenton and other primary and secondary towns are captioned with readable fonts. Useful insets lay out in detail the city layout in major settlements like Trenton, Atlantic City and Downtown Atlantic City.

Each city map is complete with the latest street information and accurate location markings of landmarks. Significant physical features like Atlantic Coast, rivers, lakes, national parks and state parks are depicted with quality imaging. Boundaries with other states are demarcated with contrasting colors and can be identified in a glance. National highways, state highways, intersections, other primary and secondary roads airport location are other details that form a part of the frame.

The map frame is supplemented with a useful legend, a driving distance chart and two useful indices of towns/cities and counties. Other interesting features are, a miniature map of the United States pinpointing the placement of New Jersey, along with a digitized state flagDesigned in a vivid color palette, this New Jersey Map makes a perfect display and combines information with style.

New Jersey is the fourth smallest state in terms of area and the 11 most populous in the nation.Capital city Trenton was once the capital of the United States in 1778. Largest municipality in New Jersey is Galloway Township followed by Hamilton Township and Washington Township.