The Map of Ohio depicting the urban layout is an instant favorite because of its warm colors and in-depth factual detailing. The map stands out for its usability, quality and comparative price valuation. State capital Columbus and many cities are marked with correctness in their true location.

Transportation network interlinking the entire state is drawn out elaborately throughout the map.

This map is available in 20.75 x 31.25 in. Please select a finish of your choice
Please wait, adding to your cart
Please wait, initializing the product
Add to Compare 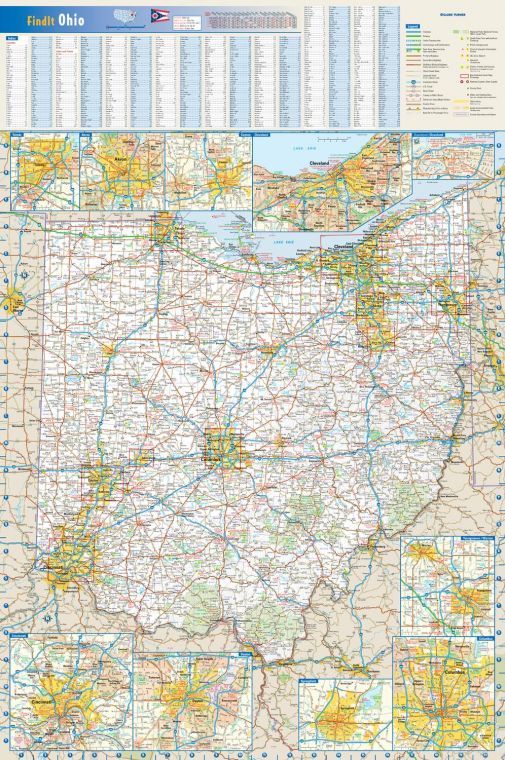 This urban political map of Ohio aims to broaden our knowledge about the state with visual learning. Well researched data makes this map perfect for general reference and display. In planimetric layout the map shows clear boundary demarcations, placement of state capital Columbus along with major cities and towns.

Highlighted box markings of important settlements are depicted in insets. The city layout of Akron, Canton, Cincinnati, Cleveland, Columbus, Dayton, Springfield, Toledo and Youngstown contain road information, points of interest, parks and historical sites. The map is also furnished with a tabular index of towns and cities, a county index and driving distance chart marked in miles, which helps estimate distance between places.

The topography is elaborated with specific terrain markings like Lake Erie, Ohio River, glaciated till plains of Great Black Swamp, Allegheny plateau, and the Appalachian plateau and the highest peak Campbell Hill.

This comprehensive map poster comes in high quality print with various finishing options. It is furnished with two detailed indices of towns /cities and county. A driving distance marker helps estimate distance between towns and cities marked on the map. The map face also provides the Country placement of Ohio along with digitized flags of the state.