This reference map of South Dakota is a handy reference piece ideal for map collectors and travel enthusiasts. The transportation network, placement of cities and state boundaries, feature in the map with accuracy.

This map is available in 17.75 x 15.25 in. Please select a finish of your choice
Please wait, adding to your cart
Please wait, initializing the product
Add to Compare 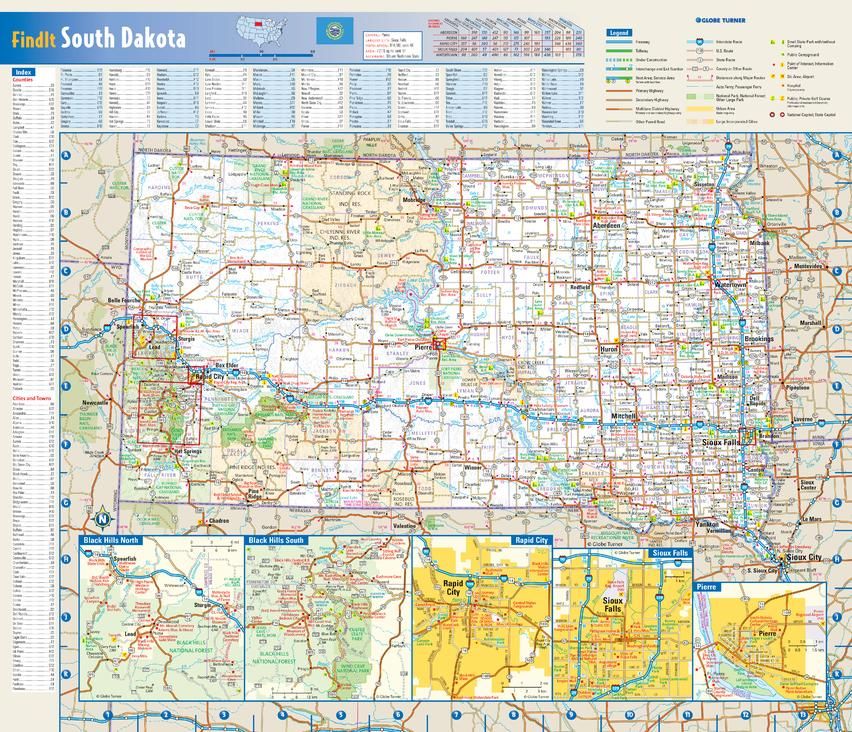 South Dakota was named after a Native American tribe, Lakota also known as Teton Sioux, who inhabited the territory.

The map of South Dakota depicts the urban and physical layout of the state with rich imagery designed in planimetric style. The state capital Pierre and major towns and settlements are named and accurately marked on the map. Route charts of interstate, national and state highways are illustrated with specific numbering and color coded thread margins. Freeways, tolls ways, state highways and other major roads are also drawn out clearly.

Two additional insets depict the terrain layout of Black Hills North and Black Hills South. The map is also furnished with a city town index, County index, distance markers, miniature map of the US indicating the placement of South Dakota along with a digitized flag of the State.

South Dakota is the fifth least densely populated state of the nation and the 17th largest state in terms of land area. Most of its population is centered on the eastern part of South Dakota. Pierre is the state capital and Sioux Fall is the largest city, Sioux Fall Metropolitan is also the largest metropolitan of the state. The economy of the state is led by the agricultural sector followed by ethanol production.