The Map of Massachusetts is an elaborate graphic representation of urban space. Up to date map data and clear labeling makes this map perfect for business, homes and offices. It shares information on state boundaries, highways, and state roads.

This map is an excellent quick reference geographical guide of the state, designed for all space.

This map is available in 30.5 x 16.75 in. Please select a finish of your choice
Please wait, adding to your cart
Please wait, initializing the product
Add to Compare 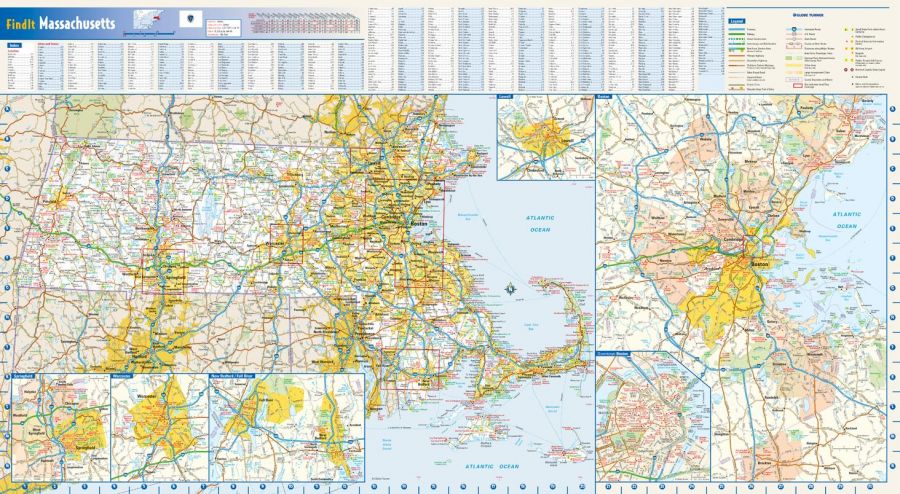 Designed with accuracy using current map data, this Map of Massachusetts is a high-quality image of the urban layout of the state. Boundaries of the state are identifiable with contrasting contours. It encompasses all primary and secondary cities and towns with highlighted box frames of important settlements. The State Capital Boston is named in its true location and can be placed easily.

This Map poster with separate cities insets is a wonderful combination quality, price, and usability perfect for display and reference. Terrain markings include significant water bodies, national parks, state parks, forest areas, and mountain peaks. A map of Massachusetts is also furnished with a city town index, County index, distance markers, miniature map of the United States pinpointing its placement along with a digitized flag of the State.

Massachusetts is the 7th smallest state in the USA. It is located in the New England region and is divided into 14 Counties. Middlesex County is the largest county in terms of population. Plymouth is the largest municipality of the state in terms of land area. Boston the State capital is a Global City and is amongst the economically powerful cities of the world

The map is also furnished with a city town index, County index and a distance marker which help locate all primary and secondary towns on the map.

A useful legend explains the symbol of population concentration, primary and secondary roads, airport location, state boundaries and much more.