A world political map that features relief shading to accurately depict each country's topography, which combined with an index makes the World Supermap the perfect educational tool, reference point or decorative map.

This map is available in 40 x 25 in. Please select a finish of your choice
Please wait, adding to your cart
Please wait, initializing the product
Add to Compare 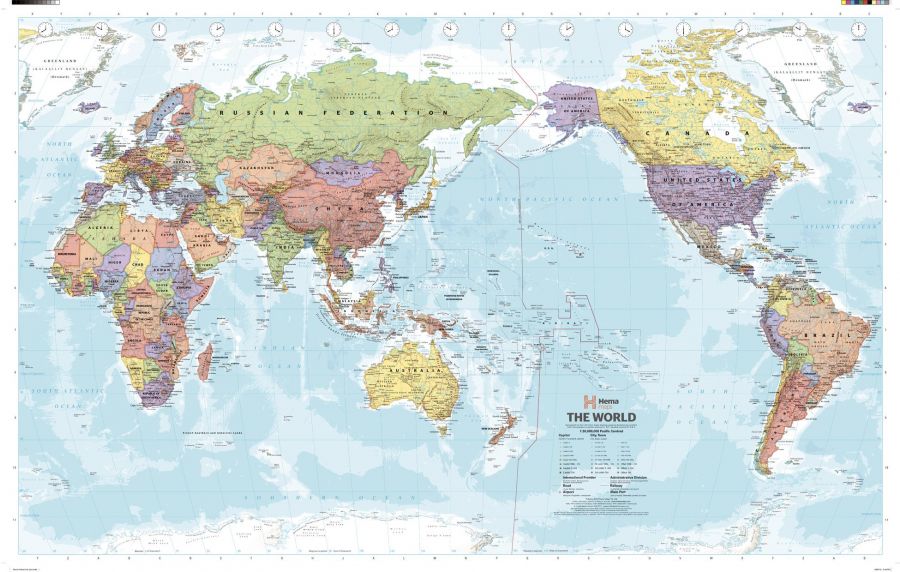 Are you looking for a map that goes well with your conference room or study? Then the Pacific Centred World Political Wall Map is just for you! The map uses warm colors and exhibits excellent cartography and comprehensive detailing to portray the world. It also locates places and outlines political boundaries. A closer look at the map shows Canada, United States of America, China, Russian Federation, India, and Australia, among other countries.

This Pacific Centred World Wall Map is composed on a scale of 1:20,000,000 which gives a clear visual representation of the world and the major geographical elements. The composition employs a subdued colour palette to add a realistic touch to the map yet keeping it simple and readable. In addition to it, distinct hues represent countries, major states, oceans, islands, continents, and international boundaries. The map also features subtle detailing of terrain using relief shading to accurately depict each country's topography.

This is an informative map that shows time zones in different parts of the world and depicts the world centred along the 150 degrees E line of longitude. Rather than parting the map along the Pacific Ocean (unlike most maps), this one parts the map along the Atlantic Ocean meaning Europe and the Americas are in separate sides of the map. It comes with a detailed index showing icons used to represent national capitals, cities, and towns. International Frontier, Administrative Division, Road, Railway, Airport, and Main port also represented on the panel below the map. A close-up view of the map shows territories (countries and capitals) highlighted in clear fonts and bold texts.

This world map pacific centred is available in 40.75 x 26 inches and 62 x 40 inches. The map can be bought online at MapTrove. One can choose finishing options for the map including paper, matte plastic, matte plastic with rails, and lamination.

Hema Maps is an Australian based mapping, navigation, and publishing company headquartered at Brisbane, Queensland. The company has been exploring Australia for 30 years, producing folded maps, atlases, guides and digital navigation products such as apps and dedicated GPS navigation systems at that time. Hema Maps has steadily built its reputation as masterful mapmakers in the four-wheel driving and outdoor adventure industries.