National Geographic's World map is the standard by which all other reference maps are measured. The World map is meticulously researched and adheres to National Geographic's convention of making independent, apolitical decisions based on extensive research using multiple authoritative source.The signature Classic style map uses a bright, easy to read color palette featuring blue oceans and stunning shaded relief that has been featured on National Geographic wall maps for over 75 years. Drawn in the Winkel Tripel projection, distortions are minimized and unlike many other World maps, Greenland is show the same size as Argentina and not as the size of all of South America.Thousands of place names are carefully and artistically placed on the map to maintain legibility even in the heavily populated areas of Europe, Asia and the Middle East. Details include clearly defined international boundaries, cities, physical features, rivers, and ocean floor features. Corner inset maps feature vegetation and land use, and population density as well as the north and south polar regions.Poster sized maps make a perfect addition to any sized space. They are specially designed to maximize content in a smaller footprint than standard wall maps and fit precisely into precut poster sized frames which makes finishing and hanging them a breeze.

This map is available in 36 x 24 inches. Please select a finish of your choice
Please wait, adding to your cart
Please wait, initializing the product
Add to Compare 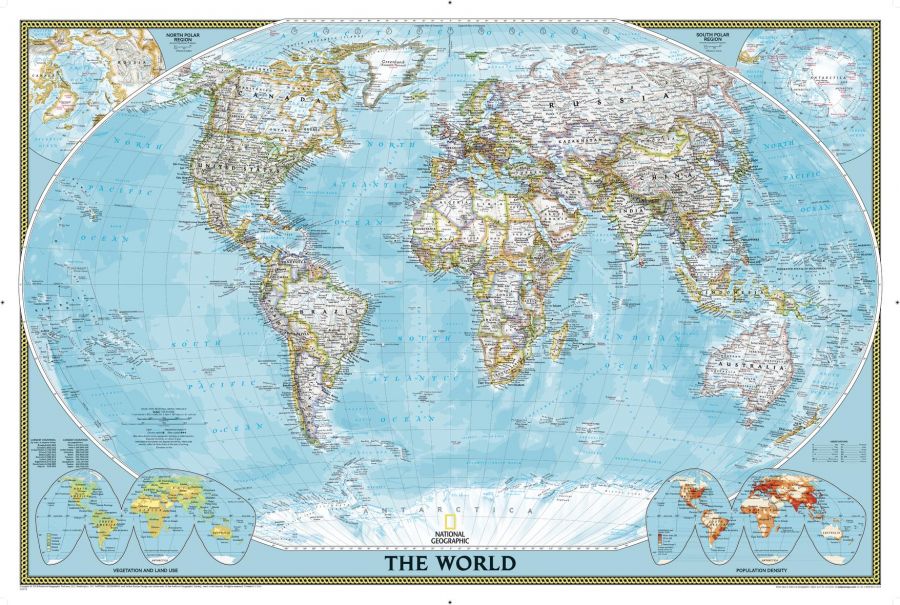 Compliment the walls of your library with an appealing World Classic Map! This National Geographic map from the Classic series is highly political, up-to-date with basic political information. The signature style map has been featured on National Geographic wall maps for over 75 years. It comes with a textural border and uses lines, contour shading, and different colours to show features such as countries, cities, rivers, roads, or mountains.

Crucial geographic details including light blue oceans, easily traceable international boundaries and National Geographic’s proprietary fonts used for locating thousands of places makes the map appear even more intriguing. The map exhibits a clear outlook and one can easily locate major countries like Canada, Russia, Brazil, Australia, Antarctica, among other countries, continents with the readable texts used on the map.

This attractive and all-inclusive World Classic wall map comes with insets showing North and South Polar regions, world vegetation, land use, and world population density. Projected as per the Winkel-Tripel prognosis, the world map reduces distortion of land masses around the poles. The projection is known for its visually accurate representation of Earth’s landmasses and is also considered as the standard projection of all world maps by the National Geographic.

You can view the map and place order at MapTrove online. It is available in size 43.75 x 30.5 inches and can be bought with a chosen finish from the options available: Paper, Matte Plastic, Matte Plastic with Rails, and Lamination.

Bring the map in use

Recognised as one of the world’s most eminent map brands, National Geographic Maps was founded in 1915 as the Map Department of the National Geographic Society. The society is responsible for illustrating the world through the art and science of map-making. Today, it continues to make the world’s greatest wall maps, outdoor recreation maps, travel maps, atlases and globes.