Map of Gainesville, florida uses the base map data from TomTom. The data is updated every 6 months making this one of the most updated printed large map of Gainesville, FL and its neighborhood areas. This map is available in a scale of 1:20,000 in 24*36 inches. If you want a map with different extents, orientation, or scale, you can do that by customizing the map here. If you have any questions, we will be happy to answer over the phone (866) 525-2298 or write to us
This map is available in 24 x 36 in. Please select a finish of your choice
Please wait, adding to your cart
Please wait, initializing the product
Add to Compare 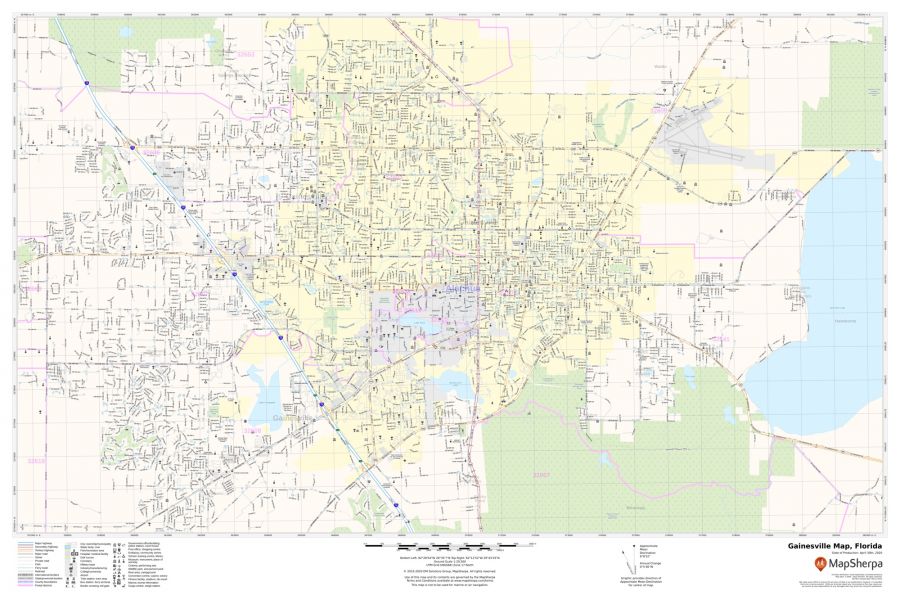 This map of Gainesville has been made based on well-researched data. Significant physical attributes like, Major water bodies, recreation parks, resorts are clearly visible on the map. The map also highlights Municipal, town, and ZIP code boundaries.

Gainesville is the county seat of, and largest city in Alachua County, Florida, and is both the principal city of Gainesville, Florida Metropolitan Statistical Area, and the largest city in North Central Florida. Gainesville’s tree canopy is both dense and species-rich, including broadleaf evergreens, conifers, and deciduous species; the City has been recognized by the National Arbor Day Foundation every year since as a “Tree City, USA.