Shop for a high-quality Lake Michigan map poster featuring a visual 3D representation of the lake bottom. Relief shading and contour lines are used throughout the map to depict the height above sea level. The map also marks boat launches, rock areas, and vegetation of the lake and nearby region. You can purchase this detailed map in a variety of finishing materials including paper, matte plastic, and lamination. It can be used as referential wall decor in homes and offices.
This map is available in 27.75 x 37.25 in. Please select a finish of your choice
Please wait, adding to your cart
Please wait, initializing the product
Add to Compare 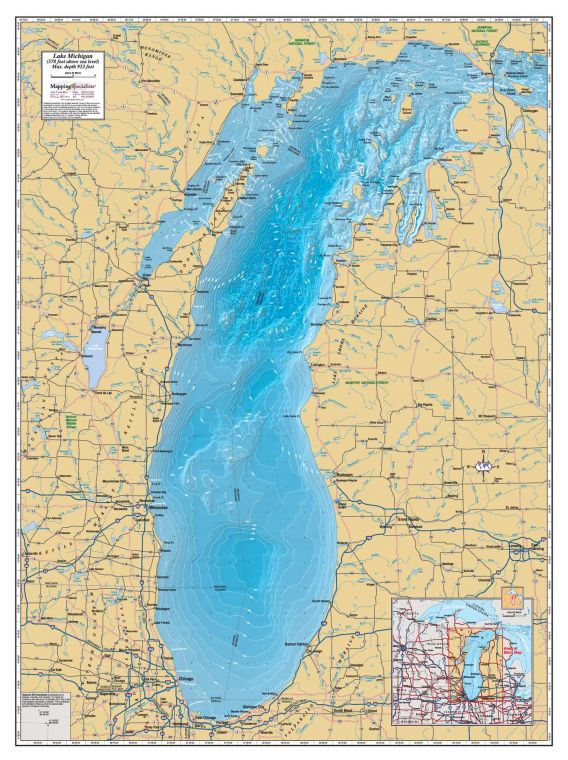 This detailed map of Lake Michigan highlights both the political and physical features of the lakes and surrounding areas. It uses relief shading and contour lines to depict various landforms and height above the sea level. All major mountain ranges, parks, cities, and roads are clearly identifiable. You will also find information about boat launches, rock areas, and vegetation on the map.

The map is printed in high-quality, making it ideal for wall display in office spaces, educational institutions, and homes. It also makes a fascinating gift for your friends and loves ones. You can buy this map in a variety of finishes like paper, laminated, and matte plastic.

Where is Lake Michigan?

Formed around 1.2 billion years ago, Lake Michigan is located wholly in the United States. It lies in the region known as the American Midwest and is bordered by Michigan state to the east and north, Wisconsin to the west, Illinois to the southwest, and Indiana to the southeast. The lake connects with Lake Huron through the Straits of Mackinac in the north.

Lake Michigan is the second-largest of the five Great Lakes of North America with a volume of 1,180 cubic mi (4,900 km3). It is also the third-largest by the surface area of 22,404 sq mi (58,030 km2), after Lake Superior and Lake Huron. This is the only one of the Great Lakes that is located entirely within the territory of the United States.

Bathymetry of the Lake