Perfect for homes, offices and schools, this map of North Carolina depicts the urban layout of the State. The expanse of the State is elaborated with placement of hundreds of cities and towns.

State capital Raleigh and some major settlements are highlighted and elaborated in insets.Separate frames bring out the detailed layout of Raleigh-Durham-Chapel Hill and Greensboro–Winston-Salem along with major urban settlements like Fayetteville, Wilmington, Asheville and Charlotte.

The Map of North Carolina draws out the detailed network of primary and secondary highways operative in the state. Airports parks and military installations can also be placed .

This map is available in 27.5 x 21.75 in. Please select a finish of your choice
Please wait, adding to your cart
Please wait, initializing the product
Add to Compare
Email 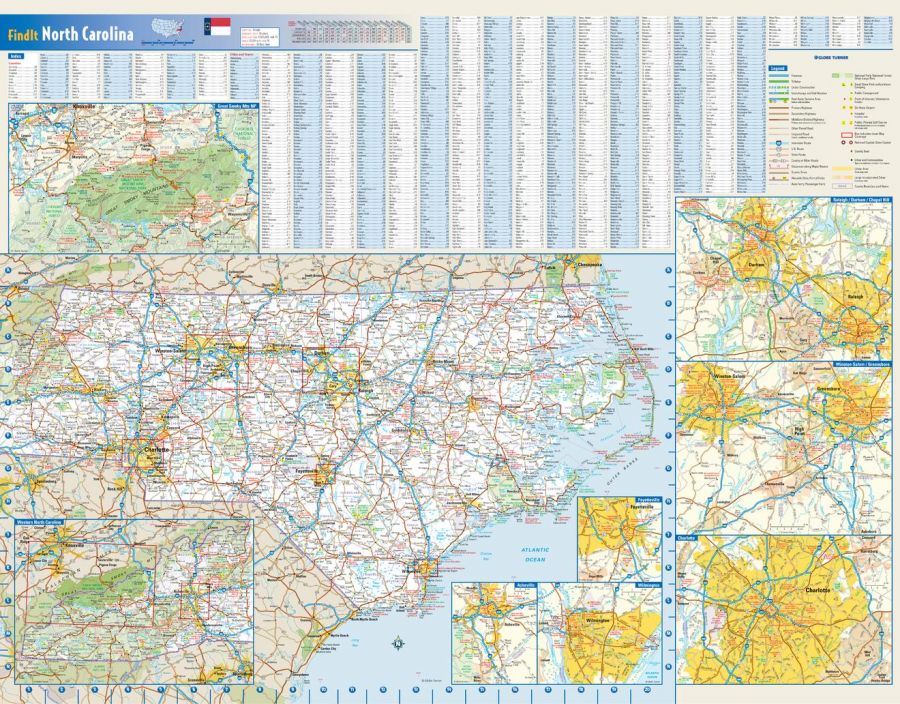 Designed with accuracy using current map data, this Map of North Carolina is a high quality projection of the urban and physical layout of the state. Boundaries with other states are demarcated with contrasting contour. All primary and secondary cities and towns are named in their true location for easy understanding. Highlighted box frames indicate placements of major settlements and metropolitan areas which are elaborated in insets.

The diverse terrain regions of North Carolina, include the Atlantic Coastal Plains in the eastern portion, The Piedmont plateau in the central part and the mountain region in the west which is a part of the Appalachian Ranges. The Appalachian mountains within the state include the great Smoky Mountains, The Blue Ridge Mountain and the black Mountains. Mount Mitchell, the highest peak of North Carolina can be placed on the map with ease. The State is home to 24 State Parks and 14 National Parks. The Great Smoky Mountains National Park is the most visited national park of the region and is laid out in a separate frame along with Western North Carolina.

It is also furnished with two elaborate indices, one of cities/ towns and the other showing counties. A driving distance chart marked in miles, miniature map of the United States pinpointing the placement of North Carolina along and a digitized flag of the State are other interesting details of the map. It also has a useful legend which explains the symbol of urban concentration, primary and secondary roads, airport location, state boundaries and much more.

The map is furnished with 8 detailed insets. The city layout of Fayetteville, Wilmington, Asheville and Charlotte are elaborated with latest street information, points of interest, parks and natural spaces. The two major metropolitans of the state are also depicted in separate frames. It Includes combined statistical areas of Raleigh-Durham-Chapel Hill and Greensboro–Winston-Salem. The primary physical region of North Carolina is located in Western North Carolina which is also elaborated in an inset along with The Great Smoky Mountains National Park, the most visited national park of the region.

This comprehensive map poster is ideal for reference use because of its accurate data and clear depiction of the State’s urban and physical layout.