Virginia is nicknamed “The Old Dominion”, as it was established as the first permanent English Colony in 1607. Officially the city is known as the Commonwealth of Virginia.

This reference map of Virginia is a handy reference piece ideal for map collectors and travel enthusiasts. It presents an overview of the urban space and provides valuable geographic information. The topography transportation network, names of many cities and state boundaries, feature in the map with accuracy.

It also highlights the cityscape of settlements like Lynchburg, Charlottesville, Petersburg, Hampton Roads, Roanoke, Williamsburg and Richmond. A separate inset draws out the details of southwestern Virginia and the National Capital Washington DC.

This informative and attractive piece of cartography designed by experts of Globe Turners can be ordered different finishes.

This map is available in 30.75 x 19.25 in. Please select a finish of your choice
Please wait, adding to your cart
Please wait, initializing the product
Add to Compare
Email 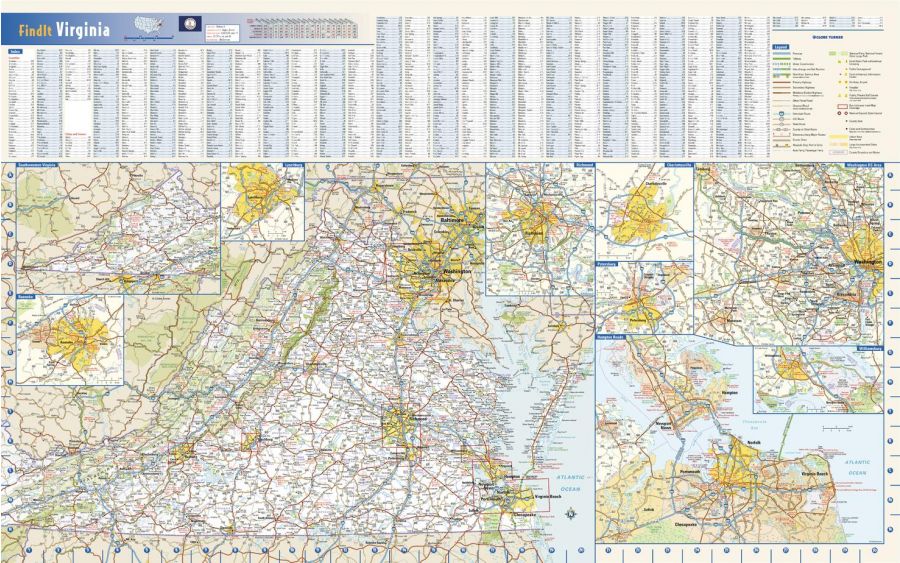 Virginia is nicknamed “The Old Dominion”, as it was established as the first permanent English Colony in 1607. Officially the city is known as the Commonwealth of Virginia.

The map of Virginia depicts the urban layout of the state with rich imagery designed in planimetric style. The state capitals, major towns and cities are named and accurately marked in the map with readable fonts. Route charts of interstate, national and state highways are illustrated with specific numbering and color coded thread markings.

A separate inset draws out the details of southwestern Virginia and the National Capital Washington DC.. The map is also furnished with two informative indices, a distance chart, miniature map of the US indicating the placement of Virginia along with a digitized flag of the State.

This visual organizer also furnishes detailed information on towns/ cities and counties laid out in a tabular form. An additional chart provides the driving distances measured in miles, between towns and cities. An elaborate key table simplifies symbolic data like national highways, state highways, important settlement, airports, national park, state park etc. A state Flag and national placement of the Virginia in national layout our other interesting details of this map design.