Map of Fresno, California uses the base map data from TomTom. The data is updated every 6 months making this one of the most updated printed large map of Fresno and its neighborhood areas. This map is available in a scale of 1:22,000 in 48 x 36 inches. If you want a map with different extents, orientation, or scale, you can do that by customizing the map here. If you have any questions, we will be happy to answer over the phone (866) 525-2298 or write to us
This map is available in 36 x 48 in. Please select a finish of your choice
Please wait, adding to your cart
Please wait, initializing the product
Add to Compare 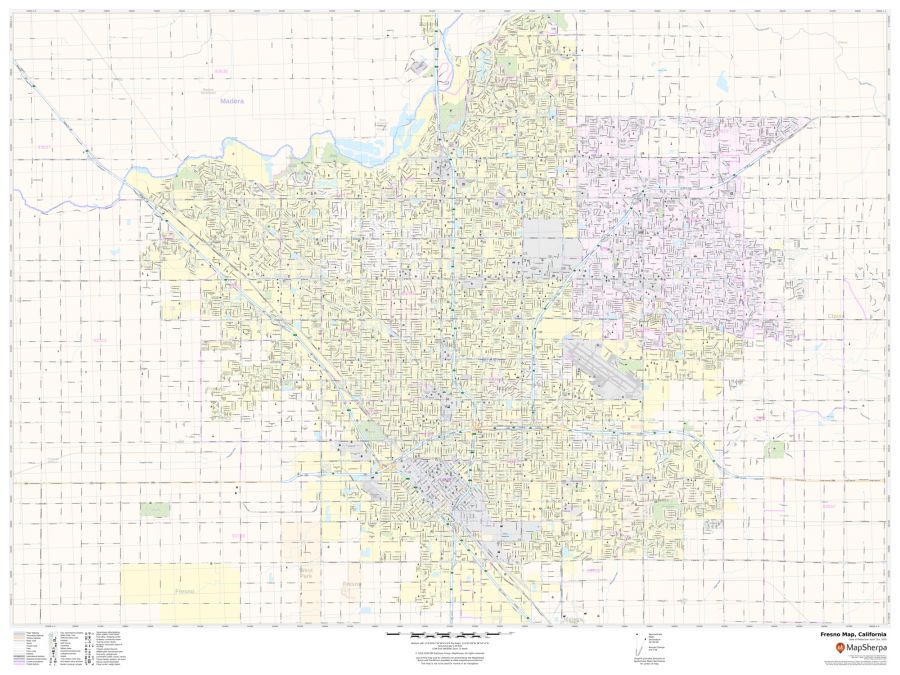 The max print scale of the map is 1:10,000 and the Min Print scale is 1:2,000,000. The customizable map is available in landscape and portrait orientation. The title of your choice can also be added to the map. A map legend featured at the bottom helps all the signs, characters graphics, and symbols used throughout the map.

Fresno is a city in and the county seat of Fresno County, California, United States. It covers about 112 Square miles (290 km2) in the center of the San Joaquin Valley, the southern portion of California’s Central Valley. The city has over time become an economic hub of Fresno County and San Joaquin Valley, with much of the surrounding areas in the Metropolitan Fresno region predominantly tied to large-scale agricultural production.

Location of Fresno, California and major cities, national parks near it

Fresno is near the geographical center of California, placing the city a comfortable distance from several of the major recreation areas and urban centers in the state. It lies approximately 220 miles (350km) north of Los Angeles, 170 miles(270 km) south of the state Capital, Sacramento, and 185 miles(300km) southeast of San Francisco. Yosemite National Park is about 60miles (100 km) to the north, Kings canyon national park is 60 miles (100 km) to the east, and Sequoia National Park is 75 miles (120 km) to the southeast.

The three most popular neighborhoods in Fresno, California are: