Map of San Diego, California uses the base map data from TomTom. The data is updated every 6 months making this one of the most updated printed large map of San Diego and its neighborhood areas. This map is available in a scale of 1:20,000 in 48 x 36 inches. If you want a map with different extents, orientation, or scale, you can do that by customizing the map here. If you have any questions, we will be happy to answer over the phone (866) 525-2298 or write to us
This map is available in 36 x 48 in. Please select a finish of your choice
Please wait, adding to your cart
Please wait, initializing the product
Add to Compare 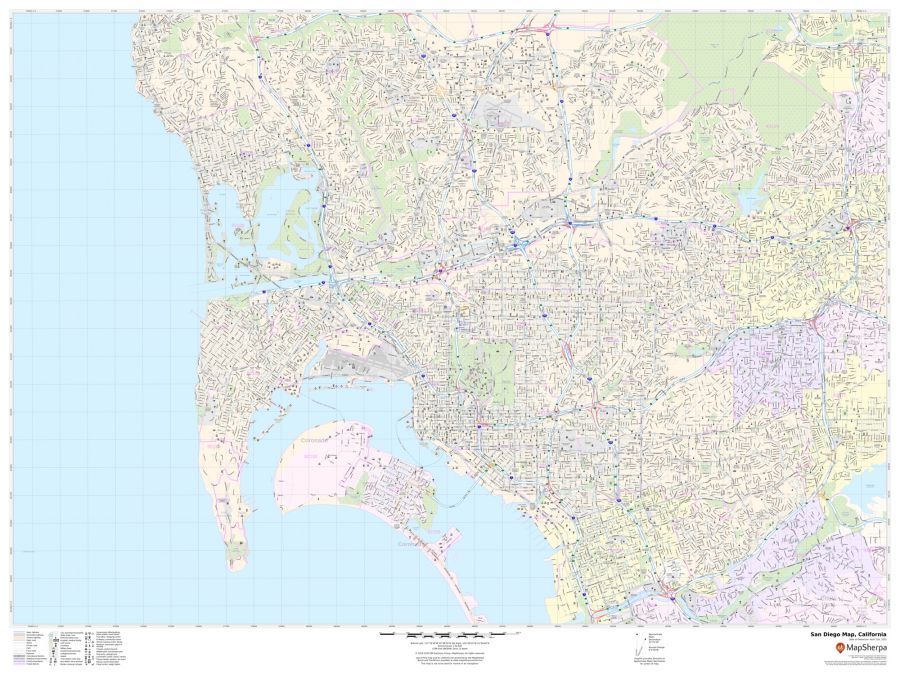 The San Diego City, California map has been designed with accuracy and based on the well-researched data. The town, municipality, and Zip code areas are demarcated on the map. The map shows street details with clearly marked landmarks, Airport (San Diego International Airport), government buildings, schools, churches, important routes, and more.

The map includes extensive Geographic details. Railways, ferry routes, and high-level land use such as parks and recreation areas; industrial areas; postal districts, and hospital campuses are mentioned at a detailed scale. The base map features all the major roads and highways(I-5, I-8) including secondary and Tertiary highways (SH-75, SH-274) labeled with neighborhood names.

A map legend featured at the bottom helps identify all signs and symbols used on the map. The scale of the map is 1:20,000. The max print scale of the map is 1:10,000 and the Min Print scale is 1:2,000,000. The customizable map is available in landscape and portrait orientation and various sizes. This high-quality San Diego, California map is available in various premium finishes including paper, canvas, and laminated. There is also an option of adding the title of one’s own choice in the Map.

San Diego is a city in the U.S. State of California on the Coast of the Pacific Ocean, approximately 120 miles (190 km) south of Los Angeles and immediately adjacent to the border with Mexico. It is a part of the San Diego-Tijuana conurbation.

The City is the seat of San Diego County and is the economic center of the region as well. The city is known for its mild year-round climate, natural deep-water harbor, extensive beaches, healthcare, and biotechnology development center.

The city lies on approximately 200 deep canyons and hills separating its mesas, creating small pockets of natural open space scattered throughout the city and giving it hill geography. The San Diego River runs through the middle of San Diego from east to west, creating a river valley that divides the city into northern and southern segments. Several reservoirs and Mission Trails Regional Park also lie between and separate developed areas of the City.

The City of San Diego recognizes 52 individual areas as community planning Areas. Within a given planning area there may be several distinct neighborhoods, Altogether the City contains more than 100 identified neighborhoods. Some of the popular neighborhood in San Diego, California are: