Map of St. Petersburg, florida uses the base map data from TomTom. The data is updated every 6 months making this one of the most updated printed large map of St. Petersburg, FL and its neighborhood areas. This map is available in a scale of 1:16,000 in 36*48 inches. If you want a map with different extents, orientation, or scale, you can do that by customizing the map here. If you have any questions, we will be happy to answer over the phone (866) 525-2298 or write to us
This map is available in 36 x 48 in. Please select a finish of your choice
Please wait, adding to your cart
Please wait, initializing the product
Add to Compare 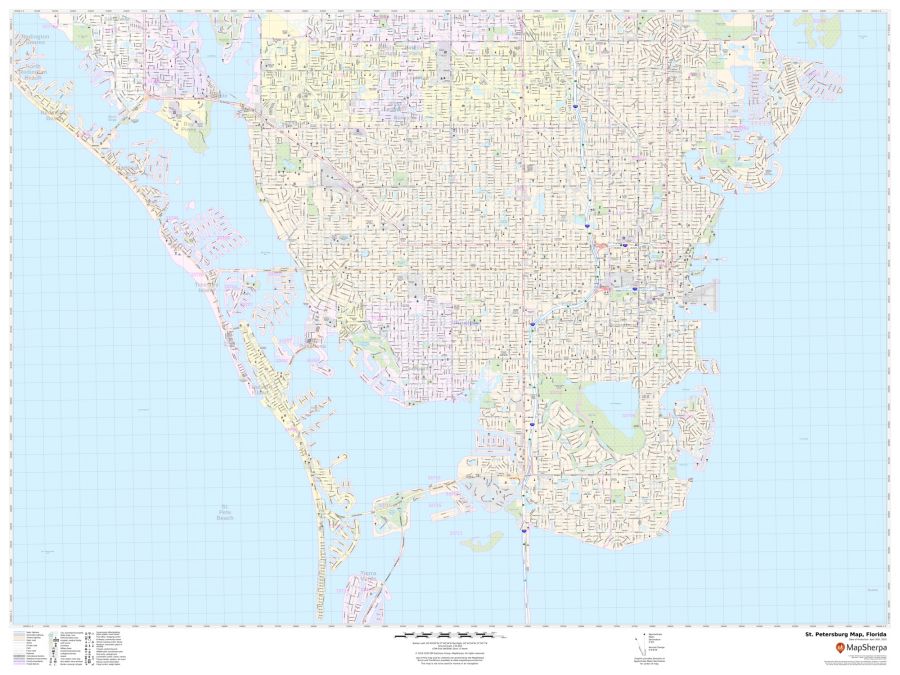 Details on the St.petersburg Map

The map includes extensive Geographic and political details. Railways, ferry routes, and high-level land use such as parks and recreation areas; industrial areas; postal districts, and hospital campuses are mentioned at a detailed scale. The base map features all the major roads and highways(I-275, I-75, I-375) including secondary (SR-595) and Tertiary highways(SH-699) labeled with neighborhood names.

A map legend featured at the bottom helps us identify all signs and symbols used on the map. The customizable map is available in landscape and portrait orientation and various sizes. This high-quality St.petersburg map is available in various premium finishes including paper, canvas, and laminated. There is also an option of adding the title of one’s own choice in the Map.

Uses of the St.Petersburg Map

This map serves various business, travel, and organizational functions including service delivery, real estate, sales territories, region planning, and much more. The detailed road networks make this map an ideal tool for general reference and planning long-distance trips. The city map's descriptive nature is clear and graspable which makes it apt for reference use.

Facts and Figures of St.Petersburg, Florida

St. Petersburg is a city in Pinellas County, Florida, United States. Together with Clearwater, these cities comprise the Tampa-St. Petersburg-Clearwater Metropolitan Statistical Area, the second-largest in Florida. The city is located on the Pinellas peninsula between Tampa Bay and the Gulf of Mexico and is connected to mainland Florida to the north. St. Petersburg is bordered by three bodies of water, the old Tampa Bay, Middle Tampa Bay, and Lower Tampa Bay, all of which form the Tampa Bay.

The city is often referred to by locals as St.Pete.Due to its good weather and low cost of living, the city has long been a popular retirement destination.

St.Petersburg is home to more than 100 neighborhoods, with most of the historic districts located near the Bay. The eastern center of the city is Downtown St.Petersburg, which includes the city’s residential and commercial skyscrapers, art galleries, museums, and parks. The downtown area is home to the central business district and to many start-up companies, corporation branches, banks, law firms, and restaurants.