Map of Rochester, New York uses the base map data from TomTom. The data is updated every 6 months making this one of the most updated printed large map of Rochester, NY and its neighborhood areas. This map is available in a scale of 1:20,000 in 36 x 48 inches. If you want a map with different extents, orientation, or scale, you can do that by customizing the map here. If you have any questions, we will be happy to answer over the phone (866) 525-2298 or write to us
This map is available in 36 x 48 in. Please select a finish of your choice
Please wait, adding to your cart
Please wait, initializing the product
Add to Compare 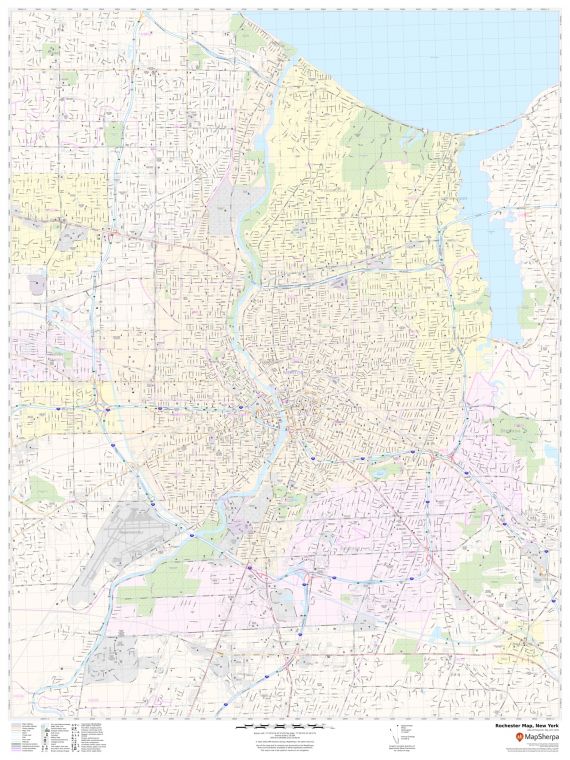 The Rochester, New York Map has been arranged with perfection, based on the well-researched data. The town, municipality, and Zip code areas are marked on the map. The map shows street details with clearly marked landmarks (The George Eastman Museum, Rochester Museum and Science Center), government buildings, schools, churches, important routes, and more.

The map includes all the Geographical and physical details like river, lakes( Lake Ontario), beaches, and other features. Railways, ferry routes, and high-level land use such as parks and recreation areas, industrial areas; postal districts, Airport and hospital campuses are mentioned in detail. The base map features all the major roads and highways(I-390, I-90, NY-531) labeled with neighborhood names.

A map legend featured at the bottom helps identify all signs, graphics, characters, and symbols used on the map. The customizable map is available in landscape and portrait orientation and various sizes. This high-quality Rochester map is available in various premium finishes including paper, canvas, and laminated. There is also an option of adding the title of one’s own choice in the Map.

This map serves various travel, business, organizational and other functions including service delivery, real estate, sales territories, region planning, and much more. The road networks make this map an ideal tool for general reference and planning trips. The map's descriptive nature is clear and graspable which makes it apt for each and every use.

Rochester’s geography was formed by the ice sheets during the Pleistocene epoch. The retreating ice sheets reached a standstill at what is now the southern border of the city, melting at the same rate as they were advancing, depositing sediment along the southern edge of the ice mass. This created a line of hills (west to east) including Mt Hope, the hills of highland park, pinnacle Hill, and Cobb’s Hill. The ice sheets also created Lake Ontario.

The major cities near the Rochester, New York are:

Rochester is a city in the U.S state of New York, on Lake Ontario is the seat of Monroe County. The City of Rochester was one of the United States’ first boomtowns, initially due to the fertile Genesee River Valley, which gave rise to numerous flour mills, and then as a manufacturing center which spurred further rapid population growth.

Rochester is considered to be a global city, ranked by the Globalization and World Cities Research Network as having sufficiency status.