Map of Syracuse, New York uses the base map data from TomTom. The data is updated every 6 months making this one of the most updated printed large map of Syracuse, NY and its neighborhood areas. This map is available in a scale of 1:16,000 in 48 x 36 inches. If you want a map with different extents, orientation, or scale, you can do that by customizing the map here. If you have any questions, we will be happy to answer over the phone (866) 525-2298 or write to us
This map is available in 36 x 48 in. Please select a finish of your choice
Please wait, adding to your cart
Please wait, initializing the product
Add to Compare 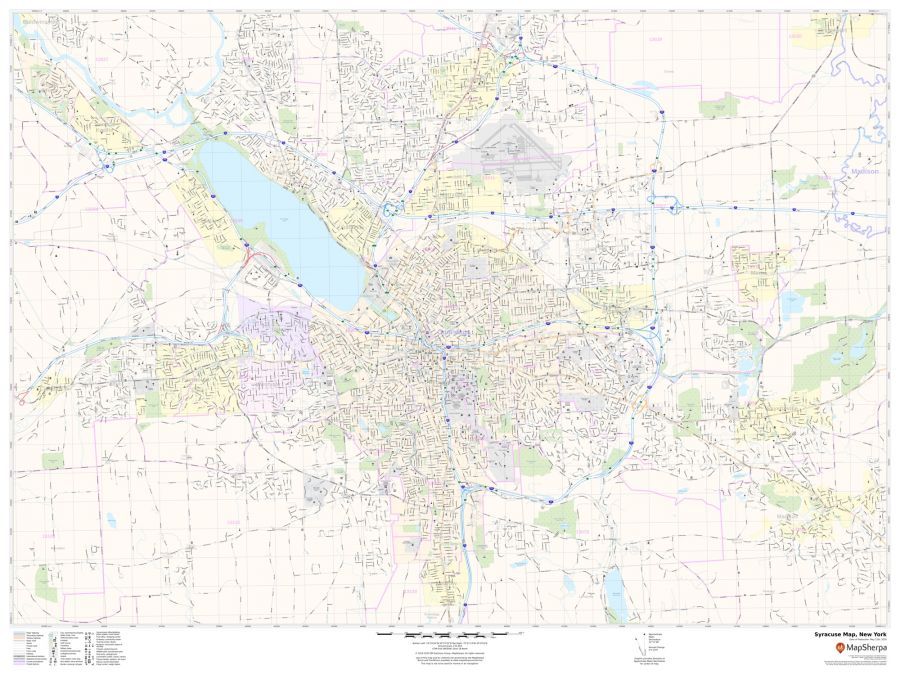 The detailed Syracuse, city map exhibits Municipal, Town, and Zip code boundaries. The major roads and highways (I-81, I-90, NY-481, NY-690,US-11),neighborhoods, lakes(Skaneateles Lake, Finger Lake), canals parks and recreational areas (Onondaga Lake Park), are easily identifiable on the map. A map legend at the bottom helps identify all signs and symbols used on the map.

Details of the map

Use of Syracuse, New York Map

Syracuse is an ideal map locating and marking points of interest, roads, business service areas and city areas on a poster. This map is absolute for the business owner who needs a local or regional road network information within a service delivery, catchment area or a sales territory. The Product can be perfect wall decor for your home, offices, and schools. The extensive road networks make this map an ideal tool for general references and planning trips.

Syracuse is a city in and the county seat of Onondaga County, New York, United States. The City is an economic and educational hub of Central New York. Syracuse is also well-provided with convention sites, with a downtown convention complex. The City has functioned as a major crossroads over the last two centuries, first between the Erie Canal and its branch canals then of the railway network. Syracuse is home to Syracuse University, a major research University.

The city developed in the northeast corner of the Finger Lakes region. Although the central part of Syracuse is flat, many of its neighborhoods are on small hills such as University Hill and Tipperary Hill. Land to the north of Syracuse is generally flat, while land to the south is hilly. The City of Syracuse maintains over 1,000 acres. The City is halfway between New York City(NYC) and Toronto. The cities near Syracuse, New York are: