Map of Yonkers, New York uses the base map data from TomTom. The data is updated every 6 months making this one of the most updated printed large map of Yonkers, NY and its neighborhood areas. This map is available in a scale of 1:10,000 in 36 x 48 inches. If you want a map with different extents, orientation, or scale, you can do that by customizing the map here. If you have any questions, we will be happy to answer over the phone (866) 525-2298 or write to us
This map is available in 36 x 48 in. Please select a finish of your choice
Please wait, adding to your cart
Please wait, initializing the product
Add to Compare 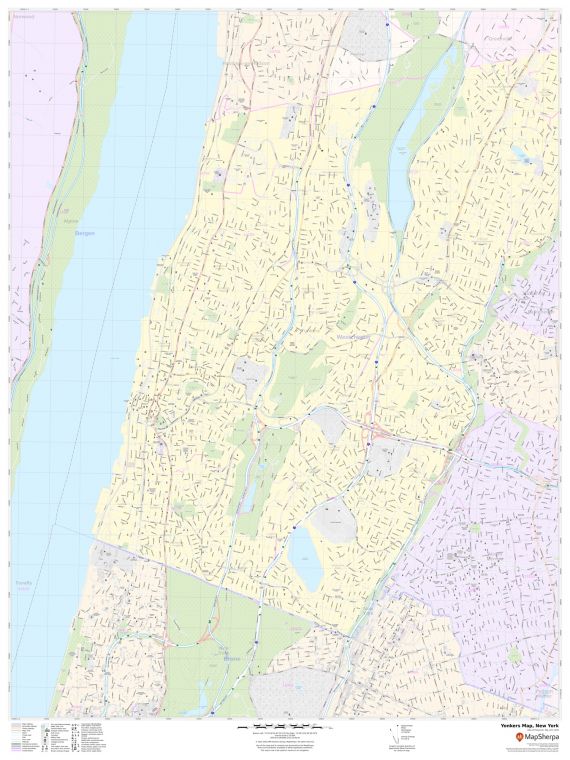 Details of the map

The base map features include all the geographical and other details like Hilly areas, Rivers(Saw Mill River)near the city. The regional map includes display highway infrastructure including weighing stations and tolls, Full street labeling, block numbers, and streets(South County Trailway) with names. Infrastructures such as hospitals, shopping malls(Getty Square),(Cross Country Shopping Center) , exhibition centers, industrial complexes, airports, and other business-centric features can also be identified in the map.

The max print scale of the map is 1:10,000 and the Min Print scale is 1:2,000,000. The title of your choice can also be added to the map. A map legend featured at the bottom helps all the signs, characters, graphics, and symbols used throughout the map to help with any information needed.

Apart from your particular requirements, you can also use this map for various business functions including planning delivery, sales region planning, retail sitting, and real estate. You can add this map to your office wall decor. This map makes an eye-catching wall display in offices, educational institutions, business centers, and home study. The elaborate road networks make this map by Mapsherpa an ideal tool for general reference and planning long-distance trips.

Yonkers is a city in Westchester County, New York, United States. Developed along the Hudson River, it is classified as an inner suburb of New York City, directly to the north of the Bronx and approximately two miles (3km) north of the northernmost point in Manhattan. Yonkers is known as the ”City of Seven Hills” which includes Park, Nodine, Ridge, Cross, locust, Glen, and Church Hill. The city is spread out over hills rising from near sea level at the eastern bank of Hudson River to 416 feet (126 m) at Sacred Heart Church.

Though Yonkers contains many small residential enclaves and communities, 37 or more distinct neighborhoods, it can conveniently be divided into four quarters, demarcated by the Saw Mill River which are: