Dallas Map, Texas uses the base map data from TomTom. The data is updated every 6 months making this one of the most updated printed large map of Dallas and its neighborhood areas. This map is available in a scale of 1:41,000 in 48 x 36 inches. If you want a map with different extents, orientation, or scale, you can do that by customizing the map here. If you have any questions, we will be happy to answer over the phone (866) 525-2298 or write to us
This map is available in 36 x 48 in. Please select a finish of your choice
Please wait, adding to your cart
Please wait, initializing the product
Add to Compare 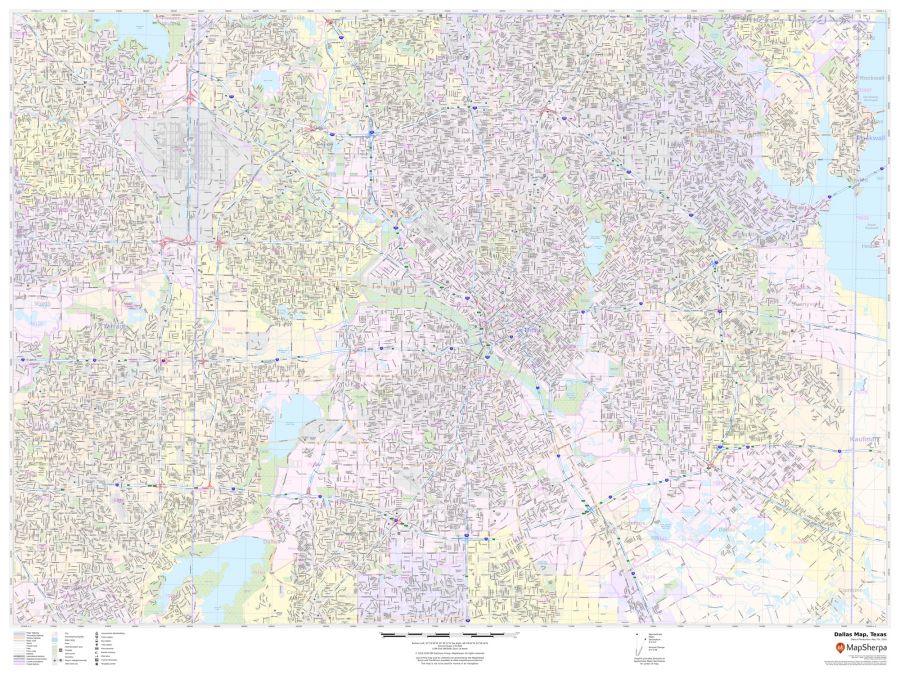 This map of Dallas City has been designed with accuracy based on well-researched data. The map highlights Municipal, town, and ZIP code boundaries. Transportation routes(I-635, I-30, I-45, E-35, US-77, SR-75, SH-342) interlinking Cities of Texas, USA are marked neatly in the map with color-coded markings.

The map depicts a high-level land use like parks, recreation areas, industrial areas, and hospital campuses. Major infrastructure like airports, police stations, shopping malls, industrial complexes, train stations is also identifiable. Railways, ferry routes, landmarks, and a variety of major points of interest are included in the map. The product has been designed to make custom maps suitable from City to County Scales, and anywhere in between.

The scale of the map is 1:41,000. The customizable map is available in landscape and portrait orientation. The title of your choice can also be added to the map. A map legend at the bottom helps identify all signs and symbols used on the map.

Portrayed in subtle colors tones this map makes an attractive wall display in offices, educational institutions, business centers, and home study. The MapSherpa product is ideal for the business owner who needs a local or regional road network information within a service delivery, catchment area, or a sales territory. The elaborate road networks make this map an ideal tool for general reference and planning long-distance trips.

Dallas is a city in the U.S state of Texas and the largest city and seat of Dallas County, with portions extending into Collin, Denton, Kaufman, and Rockwall Counties. Located in North Texas, the City of Dallas is the main core of the largest metropolitan area in the Southern United States. It is also the most populous city in the Dallas-Fort Worth metroplex.

The economy of Dallas, Texas

Dominant sectors of its diverse economy include defense, financial services, information technology, telecommunications, and transportation. Dallas is home to 9 Fortune 500 companies within the City limits. The Dallas-Fort Worth metroplex hosts additional Fortune 500 companies, including American Airlines(Fort Worth) and ExxonMobil (Irving). Over 41 colleges and universities are located within its metropolitan area, which is the most of any metropolitan area in Texas.

Neighborhood and Districts in Dallas, Texas

Besides these, some of the District of Dallas city, Texas are: