El Paso Map, Texas uses the base map data from TomTom. The data is updated every 6 months making this one of the most updated printed large map of El Paso and its neighborhood areas. This map is available in a scale of 1:33,000 in 48 x 36 inches. If you want a map with different extents, orientation, or scale, you can do that by customizing the map here. If you have any questions, we will be happy to answer over the phone (866) 525-2298 or write to us
This map is available in 36 x 48 in. Please select a finish of your choice
Please wait, adding to your cart
Please wait, initializing the product
Add to Compare 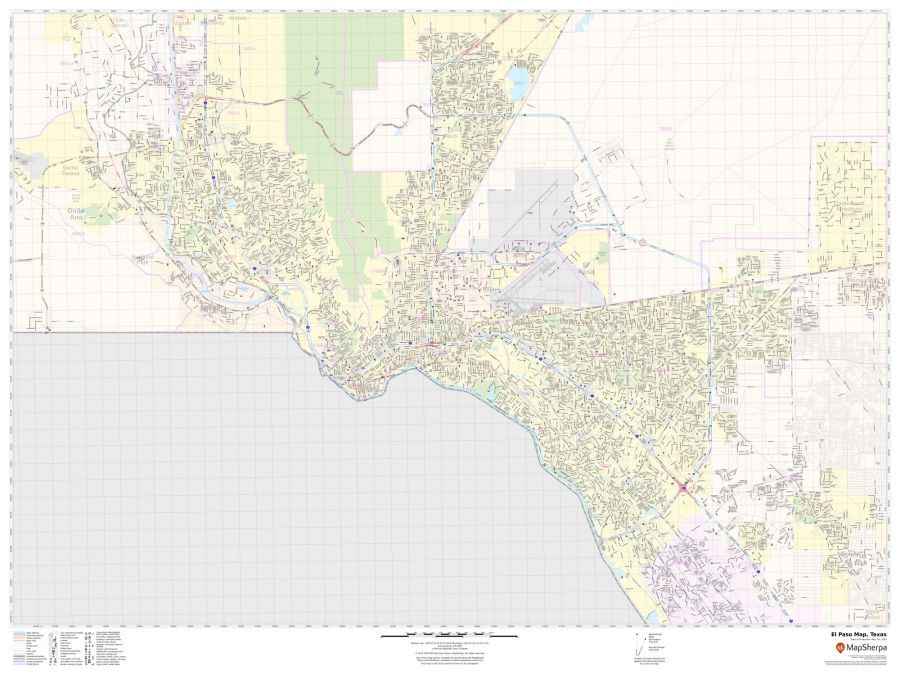 The max print scale of the map is 1:10,000 and the Min Print scale is 1:2,000,000. The customizable map is available in landscape and portrait orientation. The title of your choice can also be added to the map. A map legend featured at the bottom helps all the signs, characters graphics, and symbols used throughout the map.

El Paso is located at the intersection of three states (Texas, New Mexico, and Chihuahua) and two countries (the U.S, and Mexico). It is the only major Texas city on Mountain Time. El Paso is located within the Chihuahuan Desert, the easternmost section of the Basin and Range Region. The Franklin Mountains extend into El Paso from the north and nearly divide the city into the west and east side. The major cities near to El Paso, Texas are:

This high-quality map can be used in multiple ways:

El Paso is a city and the County seat of El Paso County, Texas, United States, in the far western part of the state. El Paso stands on the Rio Grande across the Mexico-United States border. On the U.S side, the El Paso metropolitan area forms part of the larger El Paso-Las Cruces CSA.El is located at the intersection of three states basically, Texas, New Mexico, and Chihuahua and is located within the Chihuahuan Desert.

The city is home to three publicly traded companies and former Western Refining, now Andeavor, as well as home to the Medical Center of the Americas. El Paso has a strong federal and military presence.