Map of San Diego, California uses the base map data from TomTom. The data is updated every 6 months making this one of the most updated printed large map of San Diego, CA and its neighborhood areas. This map is available in a scale of 1:70,000 in 36 x 48 inches in portrait orientation. If you want a map with different extents, or landscape orientation, or scale, you can do that by customizing the map here. If you have any questions, we will be happy to answer over the phone (866) 525-2298 or write to us
This map is available in 36 x 48 in. Please select a finish of your choice
Please wait, adding to your cart
Please wait, initializing the product
Add to Compare 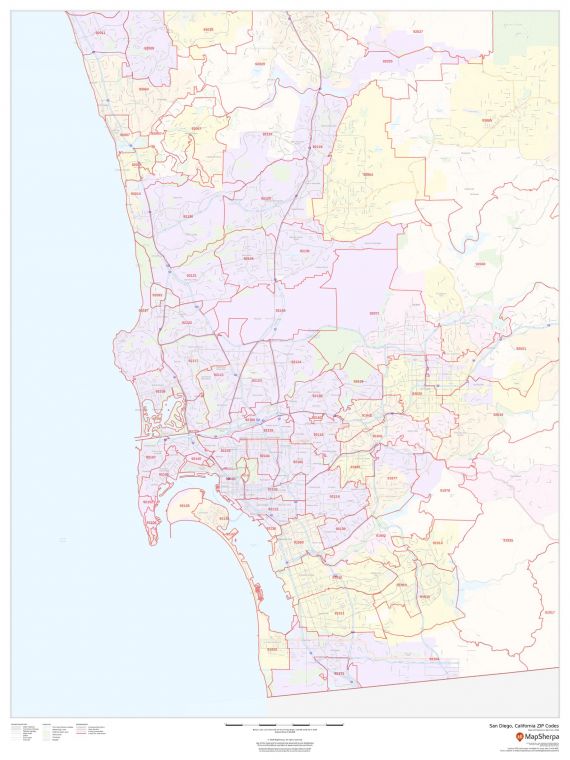 Purchase this San Diego Zip Code map featuring all 5 digit Zip code areas of the city with extensive geographic details. Locate all major road information about highways, streets, neighborhoods, and other important landmarks on this map. You can use this detailed map for service delivery, retail siting, sales region planning, and many other businesses' purposes. It is available in various finishing materials including paper, canvas, lamination.

The city has around 41 Zip codes which can be clearly distinguished on the map. You can also refer to the map legend featured at the bottom of the map to identify different signs and symbols.

How to customize this map?

We have a customizable version of this high-quality map that can be centered around the area of your choices such as your business service area or your neighborhood. You will find a search bar on the map that will help you find your location. You can also use the zoom buttons and drag arrows to get a more precise look at the city. Once you are done with customizations, you can add any title to the map and select from a range of sizes, orientations, and finishes.

How to use a San Diego area Zip code map?

The detailed and accurate information on this map is helpful while planning delivery, retail siting, sales region planning, and real estate. You can also use it for direct mail marketing services. Or simply hang this on the walls of your home or office.

The city of San Diego lies in California on the coast of the Pacific Ocean, approx 120 miles (190 km) south of Los Angeles. It has an estimated population of 1.4 million, making it the second-largest city in California. The city is also a part of San Diego–Tijuana conurbation, the second-largest transborder agglomeration between the U.S. and a bordering country after Detroit–Windsor.

San Diego, also known as "the birthplace of California", is the seat of San Diego County and is the economic center of the region.

What are the Zip codes of San Diego?

These 5 digit codes were introduced by the United States Postal Service (USPS) in 1963. They were later extended to the ZIP+4 code in 1983. Their initial function was to improve the mail delivery system but they were later used for monitoring statistics, direct mail marketing, internet routing, and credit card security.

San Diego has recognized 52 individual areas as Community Planning Areas and within every given planning area there may be several distinct neighborhoods. This in total accounts for more than 100 identified neighborhoods.

The downtown area of the city is located in San Diego Bay. Other major neighborhoods to the east and southeast include City Heights, the College Area, and Southeast San Diego. The boundaries of these neighborhoods tend to be understood by its residents based on geographical boundaries like canyons and street patterns.