Map of San Francisco, California uses the base map data from TomTom. The data is updated every 6 months making this one of the most updated printed large map of San Francisco, CA and its neighborhood areas. This map is available in a scale of 1:50,000 in 48 x 36 inches in landscape orientation. If you want a map with different extents, or portrait orientation, or scale, you can do that by customizing the map here. If you have any questions, we will be happy to answer over the phone (866) 525-2298 or write to us
This map is available in 48 x 36 in. Please select a finish of your choice
Please wait, adding to your cart
Please wait, initializing the product
Add to Compare 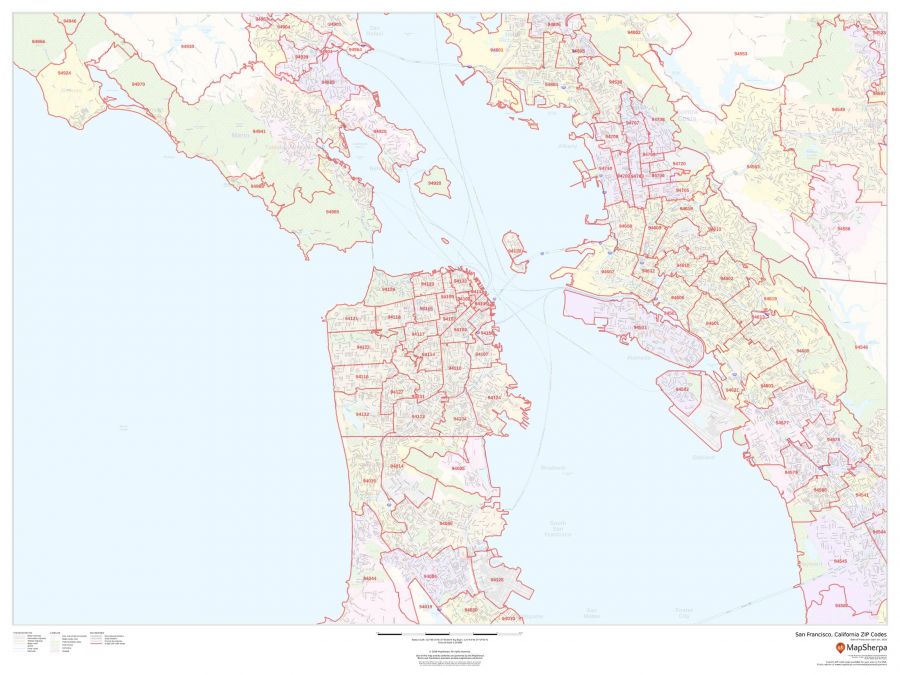 Railways, ferry routes, and high-level land use such as parks and recreation areas; industrial areas; postal districts and hospital campuses are mentioned at a detailed scale. A map legend featured at the bottom helps identify all signs and symbols used on the map.

The base map features all the major roads and highways including secondary and Tertiary highways labeled with neighborhood names.

The scale of the map is 1:50,000. It is available in the size 36x48 inches. This high-quality San Francisco Zip code map is available in various premium finishes including paper, canvas and laminated.

This map can be used for various business and organizational functions including the planning of deliveries, home services, sales territories, real estate and much more. The elaborate road networks make this map an ideal tool for general references and planning long-distance trips.

We have a high-quality customizable version of this map that can be centered around any area of your choice. The zoom buttons and drag arrows on the map will help you define the print area. Logistics and service delivery businesses can use these maps for cropping their service delivery area maps from the base maps.

San Francisco, California roughly covers 51 Zip Codes. These range from 94102-94188. USPS introduced these codes in the country in 1963 with an aim of effective mail delivery system. But today, apart from mail delivery, these codes are used for monitoring statistics, direct mail marketing, Internet routing, and credit card security.

San Francisco, in the US state of California , has both major, well-known neighborhoods and districts as well as smaller, specific subsections and developments. The San Francisco Planning Department officially identifies 36 neighborhoods. Within these 36 official neighborhoods are page number of districts.

The five major districts are identified corresponding to the four quadrants plus a south-central district. These five broad districts, counterclockwise are:

San Francisco, officially the city and county of San Francisco is the cultural, commercial and financial center of North Carolina . San Francisco is located on the west coast of the United States at the north end of the San Francisco peninsula and includes significant stretches of the Pacific Ocean and San Francisco Bay within its boundaries. several picturesque island-like Treasure Island, Angel Island are part of the City.

There are more than 50hills within the city limits. Some neighborhoods are named after the hill on which they are situated, including Nob Hill, Potrero Hill, and Russian Hill. A popular tourist destination, San Francisco is known for its cool summers, steep rolling hills, eclectic mix of architecture and landmarks including Golden Gate Bridge, Cable cars, Fisherman’s Wharf and it's Chinatown districts.