This map of New York City shows ZIP code areas marked by the red boundaries overlaid on a road map. New York City has diverse and extensive geographic details. Base level map features include all roads with major roads and highways labeled, neighborhood names and high-levels land use such as parks and recreation areas, industrial areas and hospital campuses.

You can also identify major infrastructure like airports, train stations, tourist information, police stations, and shopping centers on the map. A map legend featured at the bottom helps identify all the signs and symbols used on the map.

This map is available in a scale of 1:70,000 in 36 x 48 inches in portrait orientation. If you want a map with different extents, or landscape orientation, or scale, you can do that by customizing the map here. If you have any questions, we will be happy to answer over the phone (866) 525-2298 or write to us

This map is available in 36 x 48 in. Please select a finish of your choice
Please wait, adding to your cart
Please wait, initializing the product
Add to Compare 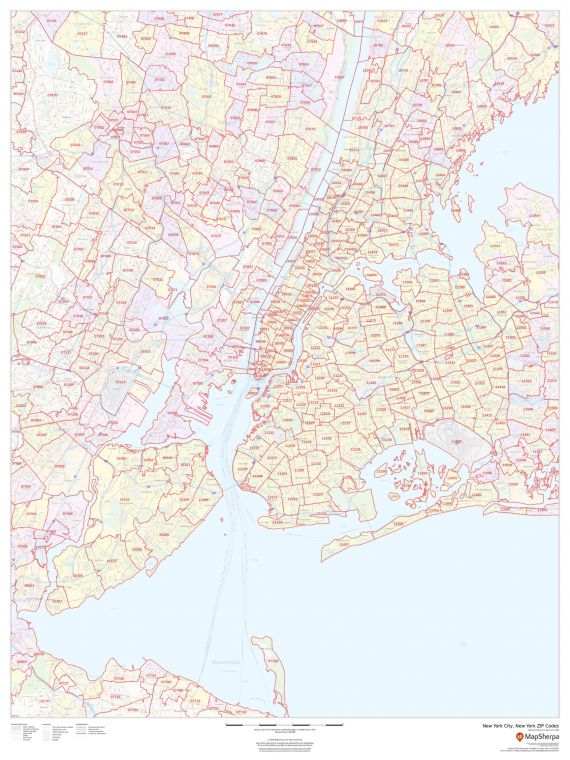 The scale of the map is 1:70,000. It is available in 36x48 inches. This high-quality, New York City ZIP code map can be purchased in various finishes including paper, canvas, and lamination.

We also have a customizable version of this map that can be centered around any location in the City whether it's your business service area, sales territory or your neighborhood. You will also find drag arrows to define the print area. After making all the customization, you can add an appropriate title and select from a range of sizes and orientations.

Apart from your specific requirements, this map can use this map for home decor, schools or businesses including planning delivery, retail siting, sales region planning, and real estate. You can create your own map by centering the map on their location and order high-quality, prints in large sizes. Many of our customers have also used this map for direct mail marketing.

A global power city, New York City has been described as the cultural, financial, and media capital of the world. Home to the headquarters of the United Nations, New York is an important center for international diplomacy.

Situated on one of the world's largest natural harbors, New York City consists of five boroughs, each of which is a separate county, of the state of New York. The five boroughs- Brooklyn, Queens, Manhattan, The Bronx, and Staten were consolidated into a single City in 1898. The city and its metropolitan area constitute the premier gateway for legal immigration to the United States.

Visit the online store of Maptrove.ca for more options.