This New South Wales map shows every road network in the country. You can locate all major cities and towns on the map. A map legend, index to towns and localities, and a distance grid is also featured on the map. You can use this for business and referential purposes in home and offices.
This map is available in 40 x 28.25 in. Please select a finish of your choice
Please wait, adding to your cart
Please wait, initializing the product
Add to Compare 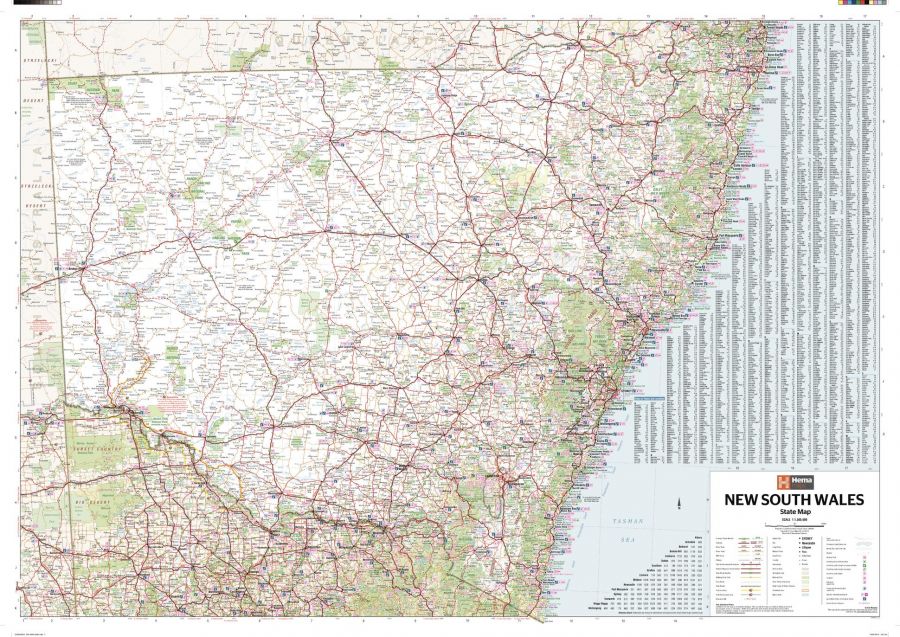 This New South Wales map shows all major cities in the country for business and referential use. It features all major road networks spread across the country. You can also identify national parks, reserves, highways, national routes, state routes, railways, restricted areas, lakes and rivers on this map.

A map legend, index to towns and localities and a distance grid make this map easy to read and understand. The bordering states like Queensland, South Australia, and Victoria are also visible on the map.

You can purchase this high-quality map for your home or office in a variety of finishes like paper, matte plastic, and laminated.

Located on the east coast of Australia, New South Wales shares the coast borders with the Tasman Sea. Its capital is Sydney, which is also Australia's most populous city.

The major centers in the state are Armidale, Bathurst, Bowral, Goulburn, Inverell, Orange, Queanbeyan, and Tamworth.

The population of the state is on the rise since the turn of the 21st century, reflecting the dynamics of economic growth. It is now the most populous state in Australia. The largest cities in the state by population are listed below:

You can buy maps of these cities by clicking on their names above. These city maps are customizable and you can center them around your preferred location.