Shipwreck Coast Victoria map highlights major roads, paths, tracks, and features of Otways West region of Victoria, Australia. You can use this topographic map for references and outdoor recreational activities like bushwalking, camping, picnicking and water activities.
This map is available in 37.25 x 29.75 in. Please select a finish of your choice
Please wait, adding to your cart
Please wait, initializing the product
Add to Compare 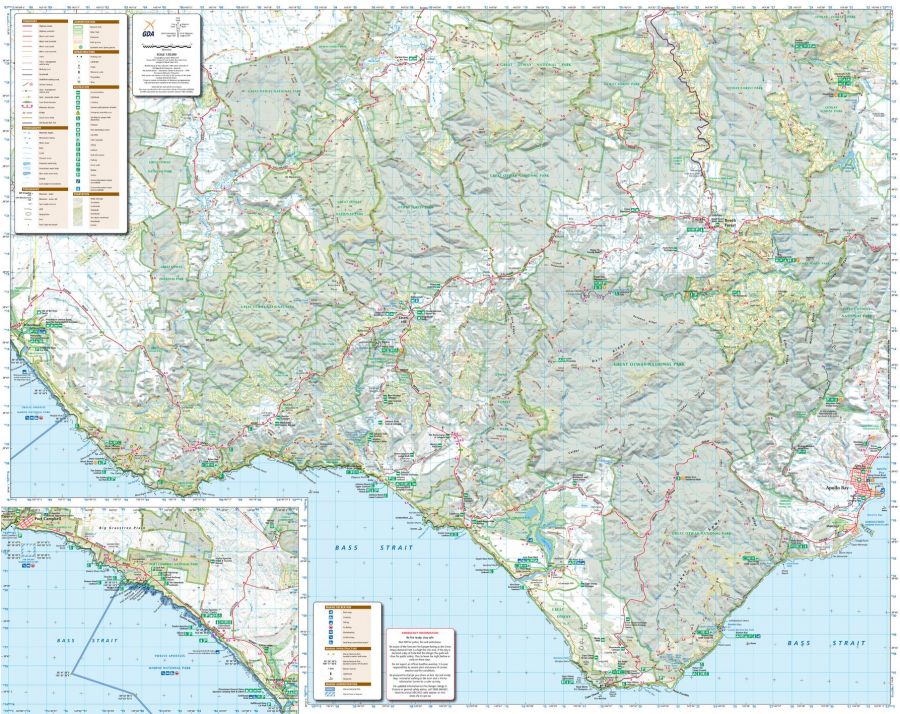 You will also find an inset map of the Bass Strait. This high-quality map can be used for references and outdoor recreational activities. You can buy it in a selection of finishing materials like paper, matte plastic, and laminated.

Otway is a cape and a bounded locality of the Colac Otway Shire in southern Victoria, Australia. It is located on the Great Ocean Road and most of its area is enclosed in the Great Otway National Park.

It was originally inhabited by the Gadubanud people and was discovered by Europeans when Lieutenant James Grant made the first west-to-east passage through the Bass Strait. Grant named this cape after Captain William Albany Otway.

Located in the Barwon South West region of Victoria, Australia, the Great Otway National Park covers the total land area of 103,185-hectare (254,980-acre). It is a popular area for interstate and international tourists with companies operating tours in the region. Major camping areas at this park are at Johanna, Aire River, and Blanket Bay. You can access this park via Apollo Bay, via Beech Forest, or via Princetown.

This coast stretches from Cape Otway to Port Fairy and covers a distance of approximately 130 km. You can access this coastline via the Great Ocean Road.

It is known as the Shipwreck Coast as there have been around 638 known shipwrecks here, out of which, only 240 of them have been discovered. The historic trail shows some of the sites where gales, human error and, in some cases, foul play caused these ships to be wrecked.