Designed by National Geographic, this map of Texas comes in high-quality print in four different finishes which include paper, Matte Plastic, laminated and Canvas.

This map is available in 41 x 38.75 inches. Please select a finish of your choice
Please wait, adding to your cart
Please wait, initializing the product
Add to Compare
Email
Be the first to review this product
Details

This Texas Map portrays the political and physical geography of the state with attractive imagery as well as accuracy. Landforms like mountains, coastlines, lakes and forest cover are illustrated with variation in color and elevation.

The state capital Austin and the largest city Houston are captioned along with other primary and secondary towns and cities. Thread markings on the map indicate national highways, state highways, and other roads. The Texas portion of the Intracoastal waterways from Brownsville to Louisiana can also be placed on the map with ease. Other details include airport locations, recreational areas, and military installations. This Texas Map is perfect for reference and can be used resourcefully in schools, offices, and homes.

Differentiation of each physical element with elevation and variations of color gives this map a unique imagery All-Terrain features like Mountain ranges, prominent peaks, Gulf Of Mexico, lakes, plains, forest regions, and deserts are marked with preciseness and captioned with clarity.

Other aspects of the map include highway system, Airports, recreational areas, and military installation. The Texas portion of the Intracoastal Waterways is also drawn out elaborately. The legend brings out other elaborate details of the title frame.

The map depicts the landscapes of the State with colored relief and elevation. Texas is the southernmost part of the Great Plains which extends up to Sierra Madre Oriental of Mexico. Texas can be distinctly divided into four geographical regions which are the Gulf Coastal Plains, Interior Lowlands, Great Plains and Basin, and Range Province. Other physical attributes include prominent peaks, lakes, rivers, forestland, deserts, plateau, Prairie, steppes and National/ State parks.

Texas is home to fourteen National Parks which can be located with clarity on the frame. The two National parks Guadalupe Mountains National Park and Big Bend. Other protected landscapes are Padre Island, The Big Thicket, Lake Amistad and Lake Meredith. There are 80 State parks and state natural areas in Texas. Historical parks and sites can also be placed on the frame. 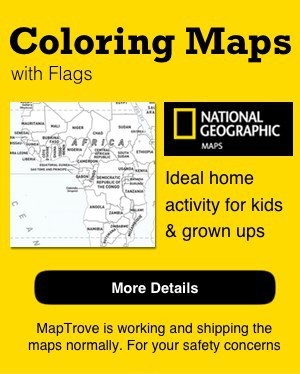