A land of sweeping prairies and abundant wildlife, Alberta, Saskatchewan and Manitoba make up Canada's agricultural heartland and Prairie Provinces. Published in December 1994 as part of the "Making of Canada" series, this map accompanied the article "Canada's Highway of Steel." 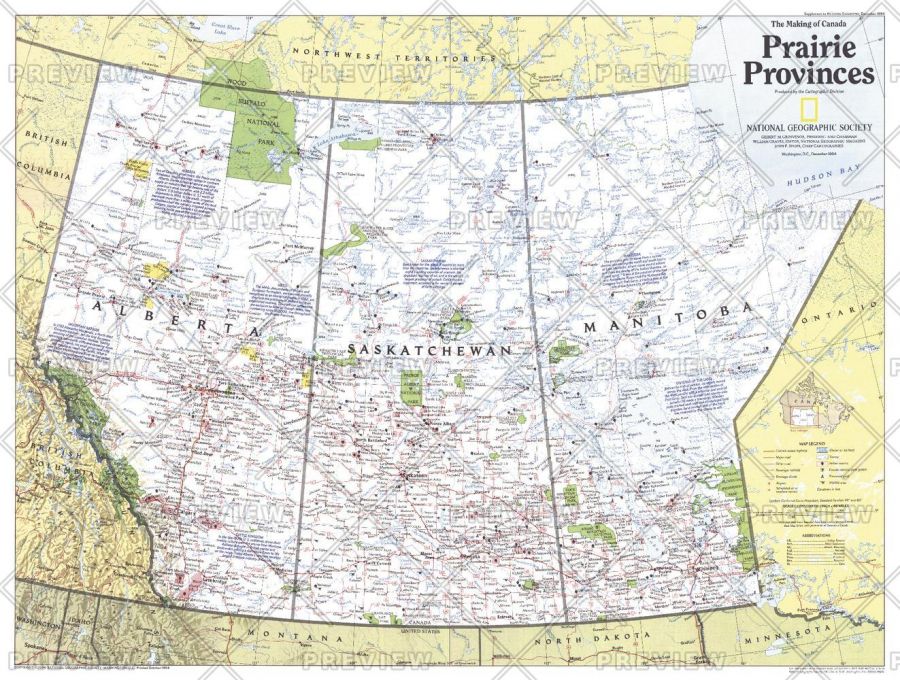 The context of the 1994 published map: Making of Canada, Prairie Provinces by National Geographic

A land of sweeping prairies and abundant wildlife, Alberta, Saskatchewan and Manitoba make up Canada's agricultural heartland and Prairie Provinces. Published on December 1994 as part of the "Making of Canada" series, this map accompanied the article "Canada's Highway of Steel." The story behind Canada’s making explores the unfolding story of an intermingling of people in the territory that later on became Canada from the earliest days of contact between Indigenous North America and Europe through the turning point year of 1885.

The central theme running behind the formation of Canada talks about the agrarian country moving to an industrial society. What followed this transformation were immigration, a relation of the Indigenous and non-indigenous people, economic development, societal and cultural changes, urbanization, war, changing gender relations - all of which found their expression in Canada’s political institutions. Presently, Canada is the second-largest country in the world with an area of almost 10,000,000 square kilometres. It became a country in 1867 but the story of the people and the land of Canada began much earlier. Many events over the last five hundred years have shaped the way Canada looked at the time of Confederation.

This epic map-series tells many of the stories that shaped this nation. From the stories of unsung heroes and darker tales sharing the spotlight with well-known figures that offer a fresh perspective on Canadian history.

Canadian provinces of Manitoba, Saskatchewan, and Alberta, in the northern Great Plains region of North America, constitute the great wheat-producing region of Canada and are a major source for petroleum, potassium, and natural gas. The region is also rich in energy resources and some of the most fertile farmland in the world and is mostly dry, with cold winters and hot summers. With British Columbia, they form the Western Provinces.

The term ‘Prairie’ is used to refer to the region in the central-western part of Canada that comprises of the three mentioned provinces. The area is covered by grasslands. Though the Canadian Prairie region stretches over parts of the northeastern province of British Columbia, it is politically not included in the region. Prairie lands have few trees and are filled with meadows. It also sees an abundance of natural vegetation such as shrubs and grasses. Some parts of the prairies have very fertile soil which is suitable for growing wheat and canola. The prairie region is the centre of agriculture in Canada.

Canada is one of the largest agricultural producers and exporters in the world. Though the proportion of the population and GDP devoted to agriculture has fallen drastically over the 20th century, agriculture remains an important element of the Canadian economy. Major agricultural products in Canada are grains and oilseeds, red meats - livestock, dairy, horticulture, poultry and eggs.