Contained within the 1st Edition (1906) of the Atlas of Canada is plate that has two maps. The first map is of the city of Montreal and the second map is of the city of Toronto. At this time the cities had a population over 25, 000. The map indicates the location of city wards, electric railways, and churches shown with the symbol of a cross.

This map is available in 17.25 x 24.25 in. Please select a finish of your choice
Please wait, adding to your cart
Please wait, initializing the product
Add to Compare 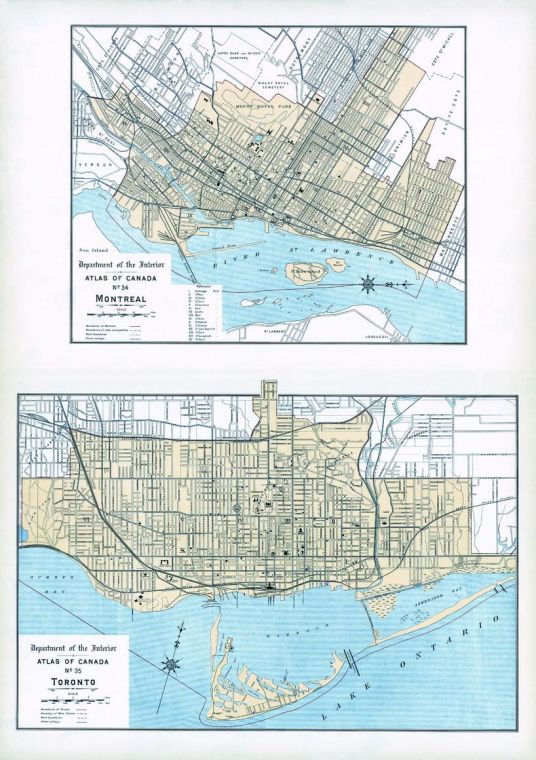 Contained within the 1st Edition (1906) of the Atlas of Canada is plate that has two maps. The first map is of the city of Montreal and the second map is of the city of Toronto. At this time the cities had a population over 25, 000. The map indicates the location of city wards, electric railways, and churches shown with the symbol of a cross.

More about the product

The product highlights two city maps of Montreal and Toronto and focuses on the networking and telecommunication setups. You can easily locate city wards, electric railway routes and networks, churches, government and corporate buildings, landmarks and more.

About the Cities shown

Montreal : Montreal is known as the most populous municipality in the Canadian province of Quebec and the second-most populous municipality in Canada. It is named after Mount Royal, a triple-peaked hill in the heart of the city. The city is centred on the Island of Montreal, which took its name from the same source as the city, and a few much smaller peripheral islands, the largest of which is Île Bizard.

Toronto : The capital city of the Ontario province and the largest city in Canada, Toronto is known to be the anchor of an urban agglomeration, known as the Golden Horseshoe in Southern Ontario, located on the northwestern shore of Lake Ontario. A global city, Toronto is a centre of business, finance, arts, and culture, and is recognized as one of the most multicultural and cosmopolitan cities in the world.

Situated in the southwest of the Quebec province, the city covers majority of the Montreal island at the confluence of the Saint Lawrence and Ottawa Rivers. The city is defined by its location between the Saint Lawrence river to its south and the Rivière des Prairies to its north. The city is named after the most prominent geographical feature on the island, a three-head hill called Mount Royal, topped at 232 metres (761 feet) above sea level.

The Canadian city covers an area of 630 square kilometres (243 sq mi), with a maximum north-south distance of 21 kilometres (13 mi) and a maximum east-west distance of 43 km (27 mi). It has a 46 - kilometre (29 mi) long waterfront shoreline, on the northwestern shore of Lake Ontario. The Toronto Islands and Port Lands extend out into the lake, allowing for a somewhat sheltered Toronto Harbour south of the downtown core.

Toronto is bordered by Lake Ontario to the south, Etobicoke Creek and Highway 427 to the west, Steeles Avenue to the north and the Rouge River and the Toronto-Pickering Townline to the east.

Montreal has a history of being recognised as the commercial capital of Canada. The city surpassed in population and economic strength in the 1970s. It remains an important centre of commerce, aerospace, transport, finance, pharmaceuticals, technology, design, education, art, culture, tourism, food, fashion, gaming, film, and world affairs. Besides, Montreal has the second-highest number of consulates in North America, and serves as the location of the headquarters of the International Civil Aviation Organization, and was named a UNESCO City of Design in 2006.

In 2017, Montreal was ranked the 12th most liveable city in the world and the best city in the world to be a university student in the QS World University Rankings. Montreal has hosted multiple international conferences and events, and is the only Canadian city to have held the Summer Olympics. In 2016, Montreal was ranked as a Beta world city. As of 2016 the city hosts the Canadian Grand Prix of Formula One, the Montreal International Jazz Festival and the Just for Laughs festival.

Considered to be an international centre for business and finance, Toronto is also named as the financial capital of Canada. The city has a high concentration of banks and brokerage firms on Bay Street, in the Financial District. The city is also an important centre for the media, publishing, telecommunication, information technology and film production industries; it is home to Bell Media, Rogers Communications, and Torstar. The city continues to be a wholesale and distribution point for the industrial sector.

Toronto’s population reached 116,511 between 2011 and 2016. Year 2016 saw foreign-born persons made up 47.5%. As per the United Nations Development Programme, Toronto also had the second-highest percentage of constant foreign-born population among world cities, after Miami, Florida.