Contained within the 1st Edition (1906) of the Atlas of Canada is a plate that show five maps displaying the cities of Vancouver, Ottawa, Hamilton, London, and Halifax. At this time these cities had a population over 25,000. The map indicates the location of city wards, electric railways, and churches symbolized as crosses.

This map is available in 24.25 x 17.25 in. Please select a finish of your choice
Please wait, adding to your cart
Please wait, initializing the product
Add to Compare 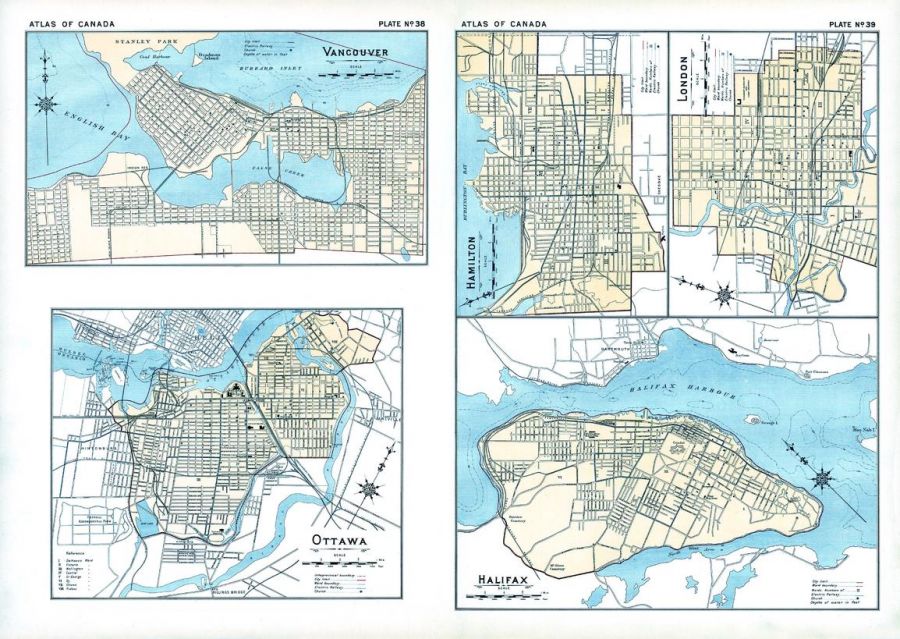 Contained within the 1st Edition (1906) of the Atlas of Canada is a plate that shows five maps displaying the cities of Vancouver, Ottawa, Hamilton, London, and Halifax. At this time these cities had a population over 25,000.

More about the Product

This 24.25 x 17.25 inches map by Natural Resources Canada highlights crucial points including city wards, electric railways, and churches symbolized as crosses. It is a set of five city maps combined together.

Cities showed on the map:

Vancouver has the highest population density in Canada with over 5,400 people per square kilometre, which makes it the fifth most densely populated city with over 250,000 residents in North America behind New York City, Guadalajara, San Francisco, and Mexico City according to the 2011 census.

Vancouver is one of the most ethnically and linguistically diverse cities in Canada where 52% of the residents have a first language other than English. Roughly 30% of the city's inhabitants are of Chinese heritage. Vancouver is also classed as a Beta global city.

Ottawa: The capital city of Canada stands on the south bank of the Ottawa River in the eastern portion of southern Ontario. Ottawa borders Gatineau, Quebec; the two form the core of the Ottawa - Gatineau census metropolitan area (CMA) and the National Capital Region (NCR).

According to the 2016 census, Ottawa had a city population of 964,743 and a metropolitan population of 1,323,783 making it the fourth-largest city and the fifth-largest CMA in Canada. Ottawa has the most educated population among Canadian cities and is home to a number of post-secondary, research, and cultural institutions.

Hamilton: Known as the port city in the Canadian province of Ontario, Hamilton is an industrialized city in the Golden Horseshoe at the west end of Lake Ontario. Hamilton population is 536,917 and a metropolitan population of 747,545.

The Hamilton City was formed through the amalgamation of the former city and the other constituent lower-tier municipalities of the Regional Municipality of Hamilton - Wentworth with the upper-tier regional government. It is also home to the Royal Botanical Gardens, the Canadian Warplane Heritage Museum, the Bruce Trail, McMaster University, Redeemer University College and Mohawk College.

London: The Southwestern Ontario city situated along the Quebec City - Windsor Corridor has a population of 383,822. London is at the confluence of the Thames River, approximately 200 kilometres (120mi) from both Toronto, Ontario and Detroit, Michigan; and about 230 kilometres (140 mi) from Buffalo, New York.

London Ontario has grown to be the largest Southwestern Ontario municipality and Canada's 11th largest metropolitan area, having annexed many of the smaller communities that surrounded it.

Halifax: Also known as the Halifax Regional Municipality (HRM), Halifax is the capital of the Canadian province of Nova Scotia. The municipality had a population of 403, 131 in 2016, with 316,701 in the urban area centred on Halifax Harbour.

The city is a major economic centre in Atlantic Canada with a large concentration of government services and private sector companies. Agriculture, fishing, mining, forestry and natural gas extraction are major resource industries found in the rural areas of the municipality.