The Utah State Map depicts the physical and political layout of the state with rich imagery and in-depth detailing. The map shows international demarcations along with placements of cities.

Highways are specifically numbered and can be identified in a glance. Separate frames highlight useful city map of Salt Lake City, the state capital, Ogden and Provo.A detailed layout of Bryce Canyon National Park and Zion National park is boxed in a separate inset. The unique merger of land features like the rugged Rockies, the Great basin and the sandstone Colorado Plateau is represented with shaded relief.

This map is available in 14.75 x 17.75 in. Please select a finish of your choice
Please wait, adding to your cart
Please wait, initializing the product
Add to Compare 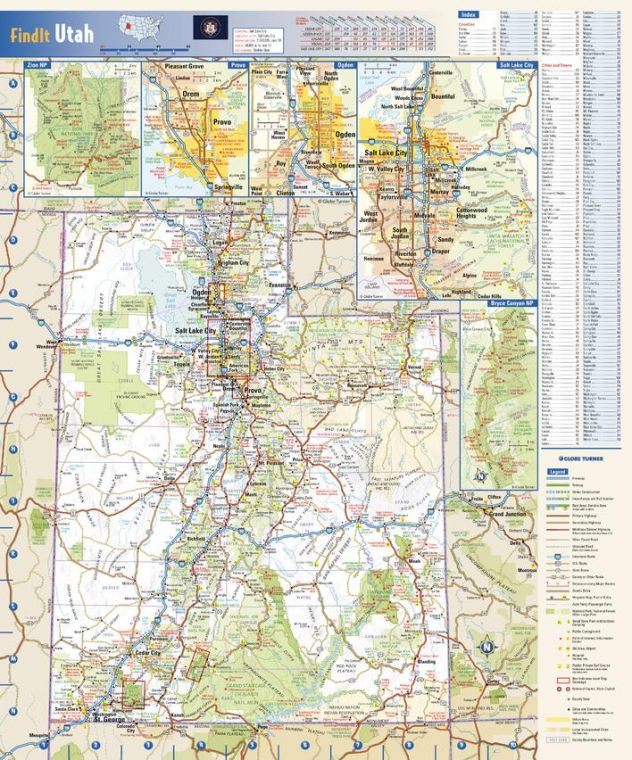 This reference map of the “Beehive” state presents an overview of the urban space, showing all primary and secondary cities, the state capital Salt Lake City and the elaborate road network interlinking the state. It also highlights the placement of three major settlements which include Ogden, Provo and Salt Lake City with box frames. The detailed city layout of these settlements are projected in separate insets for easy understanding. Boundaries with other states are clearly demarcated with different color shades and outlines. Points of interest, thoroughfares, freeway tollways, interchanges and airports are marked prominently for quick reference.

A tabular index on cities and counties and distance markers based on accurate information and map data, makes this map perfect for general reference.